What a fantastic weekend!!!!!  My LYS had the closing ceremonies party for the Ravellenic Games for Team Texas Yarnivore 2012!  Tammy is the owner of Yarnivore is totally awesome!  She had several prizes for each category.  I entered 5 items.  3 in Work In Progress Wrestling, 1 in Sock Put and 1 in Cross Country....but I did not win a prize for those.  However, Tammy had a grand prize where everyone's name was put in a hat and Tammy pulled out a name for this AWESOME Yarn made out of Pearl....yes, Pearl.  It is for Vouge Knitting Magazine's 30th Anniversary and it is made by Yarn Sisters.  Only 500 skeins were made.  AND I WON IT!  Yes, I won it!  I was sooooooooooooooooooooooooooo excited!  I cannot even tell you how excited I was.  I hardly ever win anything (I am not kidding).  So I was very surprised to win this.  I think I will pet it for a little while, and then one day I may knit it into a wedding shawl for either me (if I ever get married again) or my daughter.  It is numbered ( I have never owned anything that was numbered).  I have number 261 of 500.  I feel like I won a Lamborgini!!!

Here is an article on it:

Here are some pics: 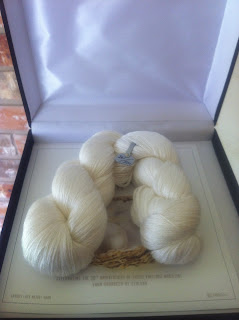 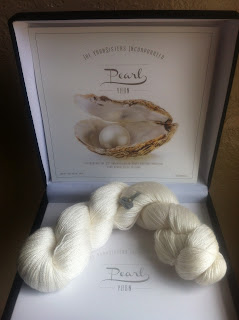 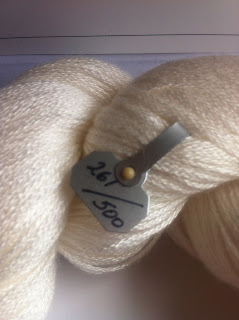 The only bad news of the weekend.....remember the Pillow KAL I was doing with www.knitpurlhunter.com ?  Well, I sent my submission in twice, and I never got a response.  Well, I think my pictures were too big (boo hoo) and the winner was already announced.  But that is OK, I won the Pearl Yarn and that was awesome enough.

Happy Monday everyone!!!
Posted by Knitphomaniac at 8:22 AM