It seems like it was not that long ago that I was moving from one house to another and it kicked my butt!  Now my daughter moved out into her own apartment and it kicked my legs this time.  See, she moved into a 3rd floor apartment and there were two sets of stairs to each floor...so you would go up stairs, turn on a small landing, go up stairs and you were on floor two....repeat and you were on floor three.  By the time I was done going up and down just 4 or 5 times, my legs were jello!  That was Friday night when I took groceries to her new apartment to surprise her.  Then on Saturday I do not know how many times I went up and down those stairs...but it was A LOT!  My calves were killing me by mid day.  But we got all the heavy stuff out of the way.  Now she just has a few small things to come and get.  She took mostly all her furniture from the house except the dining room table, we did not have an extra dining room table so I got her this one....The first pic is from an advertisement and the second and third pics are of the table in her actual apartment....that is Arran (Jaime's youngest) in the picture. 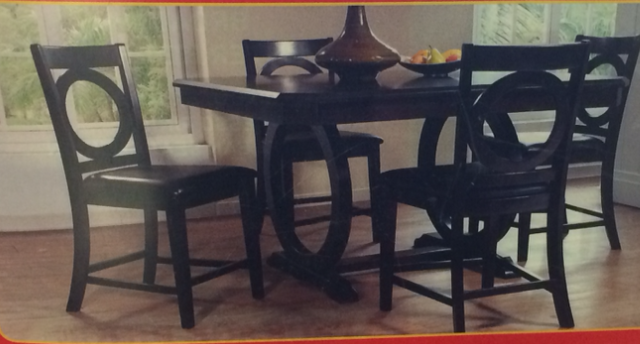 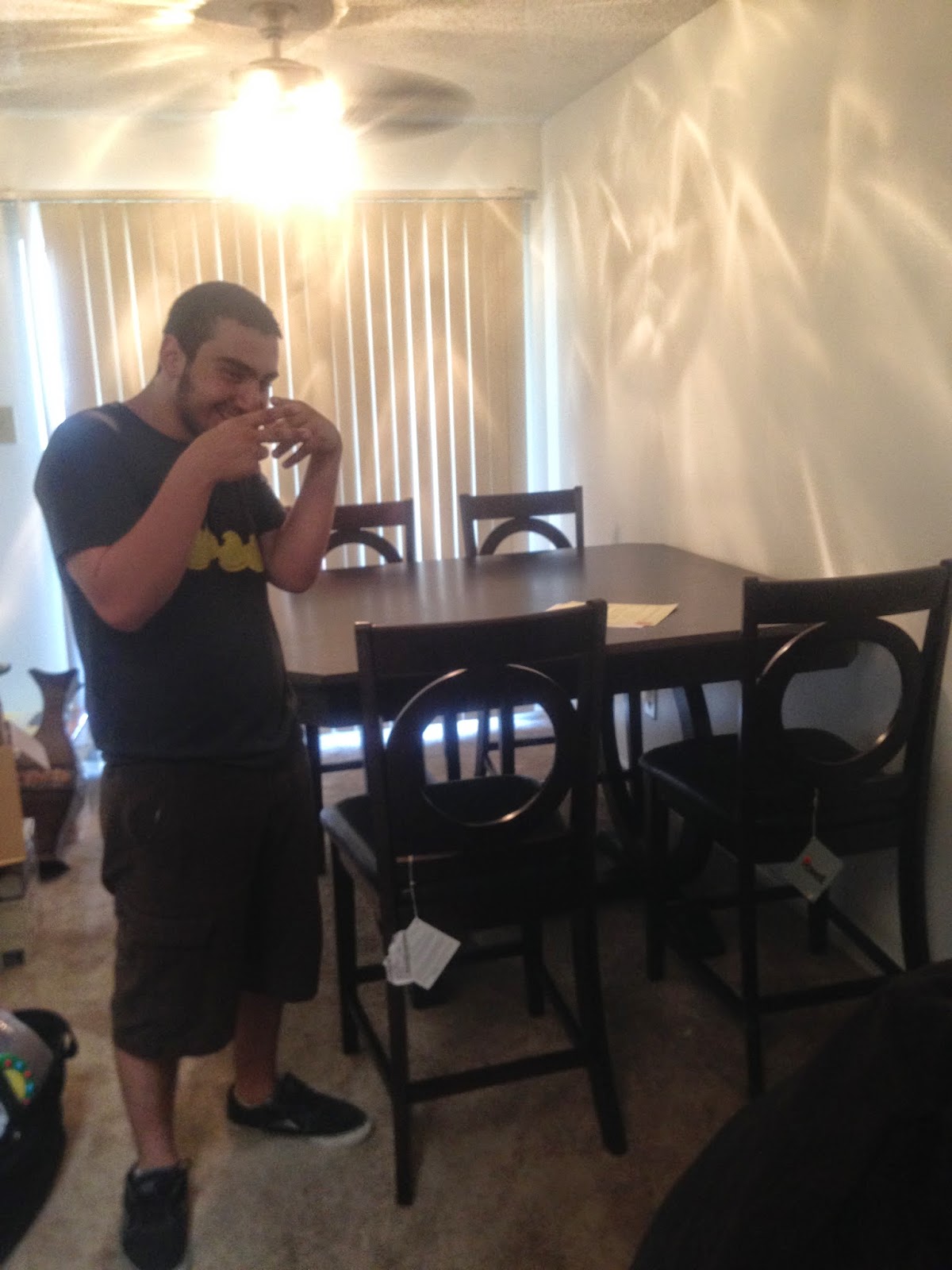 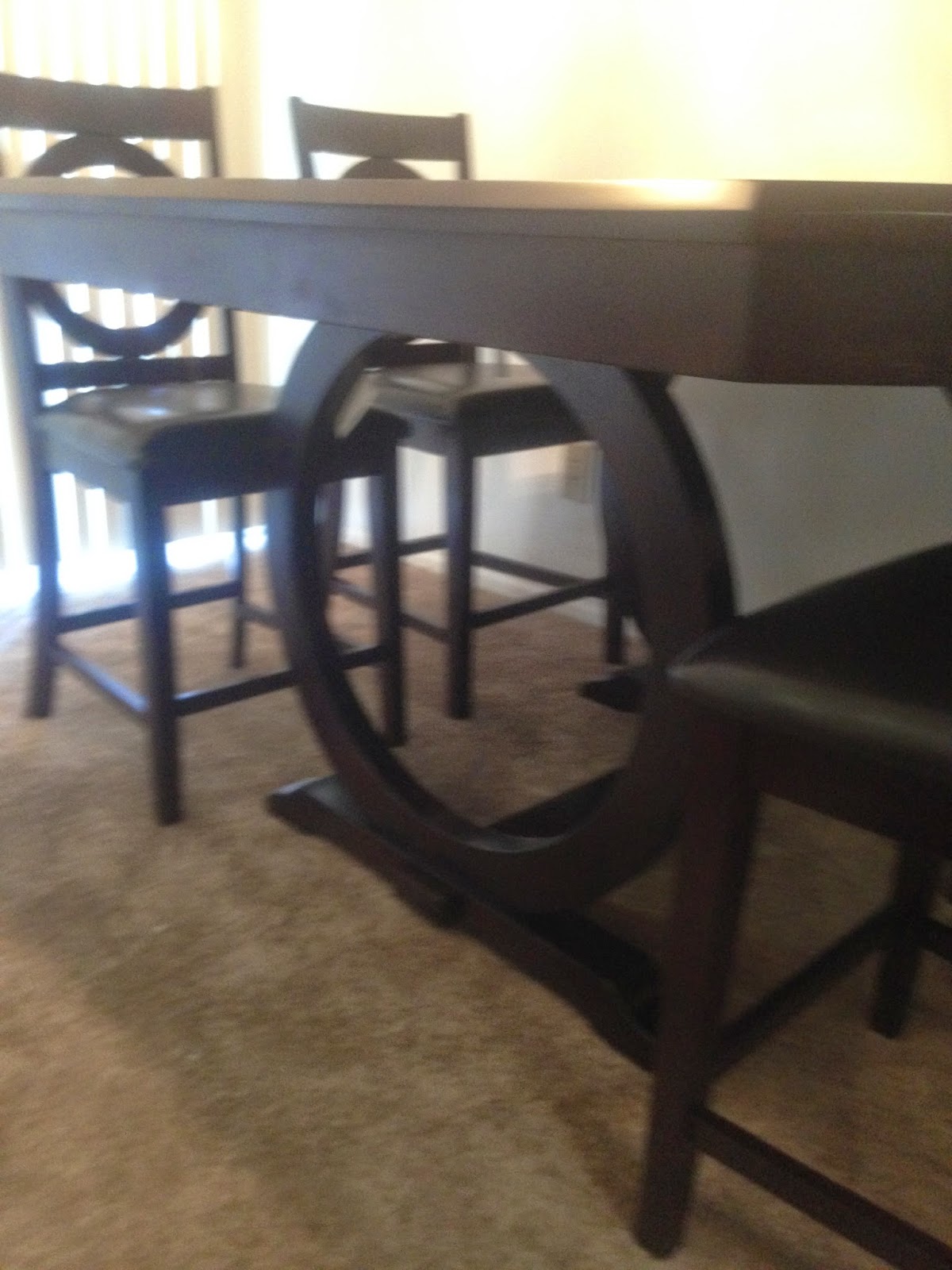 See all the circles in the legs of the table and the backs of the chairs....well, those go perfectly with the placemats I am making her for this table....no, I am not done.....and yes, I should be.....so sorry!  I made the first one during the Memorial Day weekend....I am almost done with the second one....just one more side to go....it has cables that form circles....she picked out the pattern and the table so she can obviously match better than her mother can!  The pattern is called Sunday Brunch. 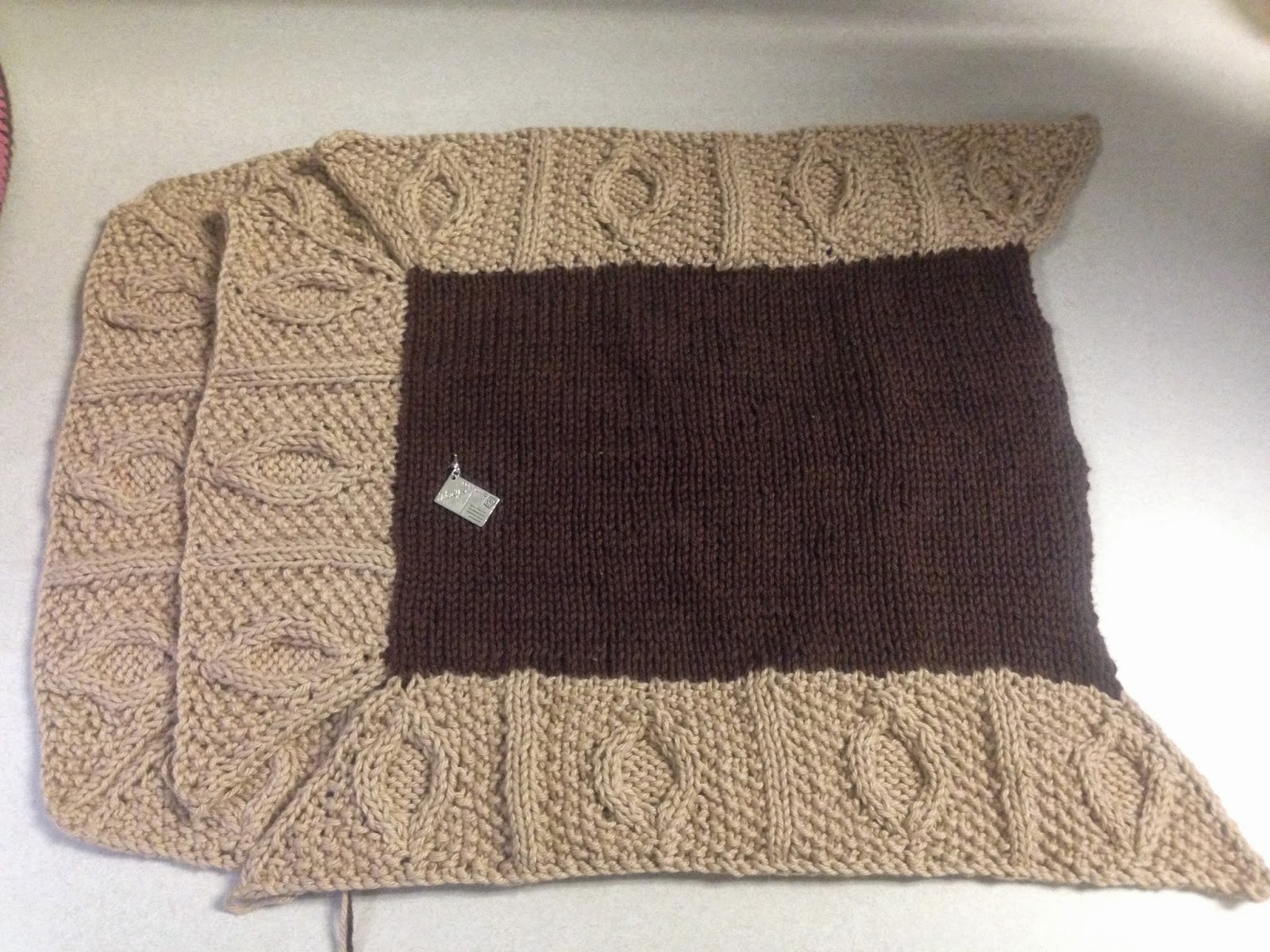 Paige said that Antonio did really well his first night at the apartment.  He has his own room there but she still woke up with him having had crawled into her bed at some point during the night...she had put up night lights so he would not not get scared....here are two pics...one with then waking up together and one with them having a doughnut at the new table (with no placemats yet). 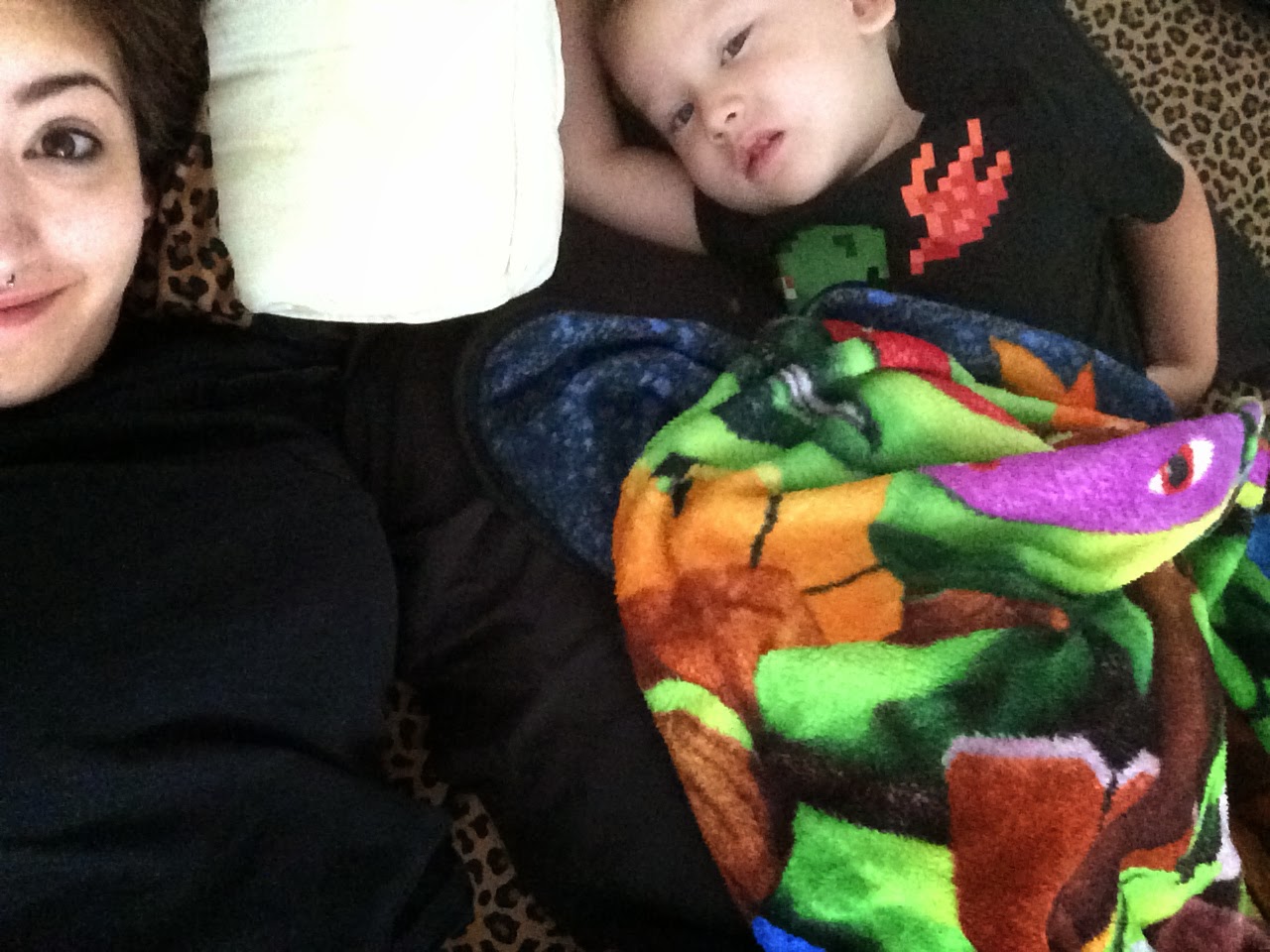 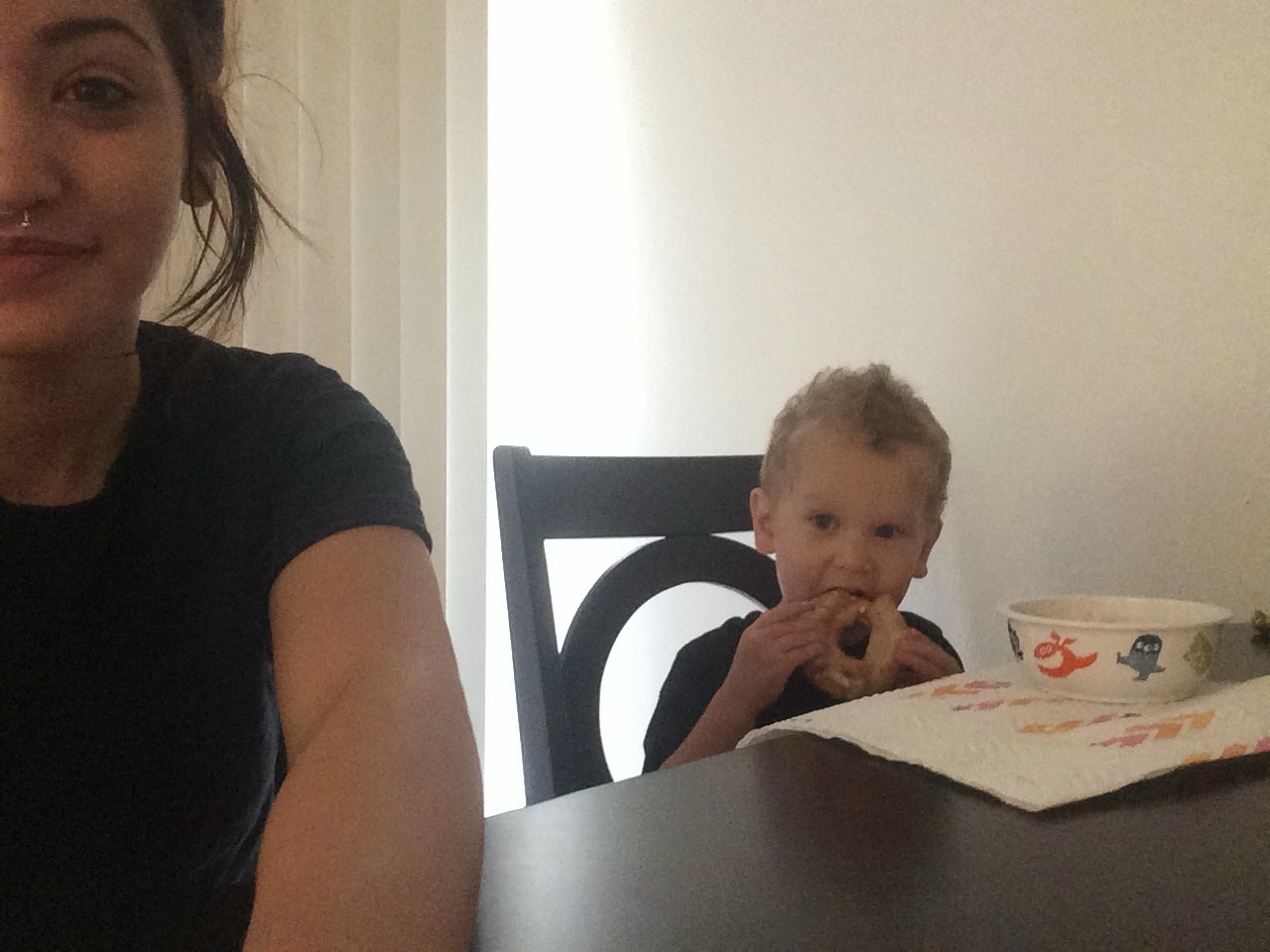 I do miss him already, but I bought some stuff for her new apartment yesterday so she came by to pick up the stuff and I got to see him and we played a while.

In other big news.....I finally got to see Darlene after 18 miserable days without her.....she is so wonderful...she got me an awesome Harley Davidson Shirt from Cody, Wyoming (she always gets me one when she is on vacation and I LOVE them)!  Thank you Darlene! 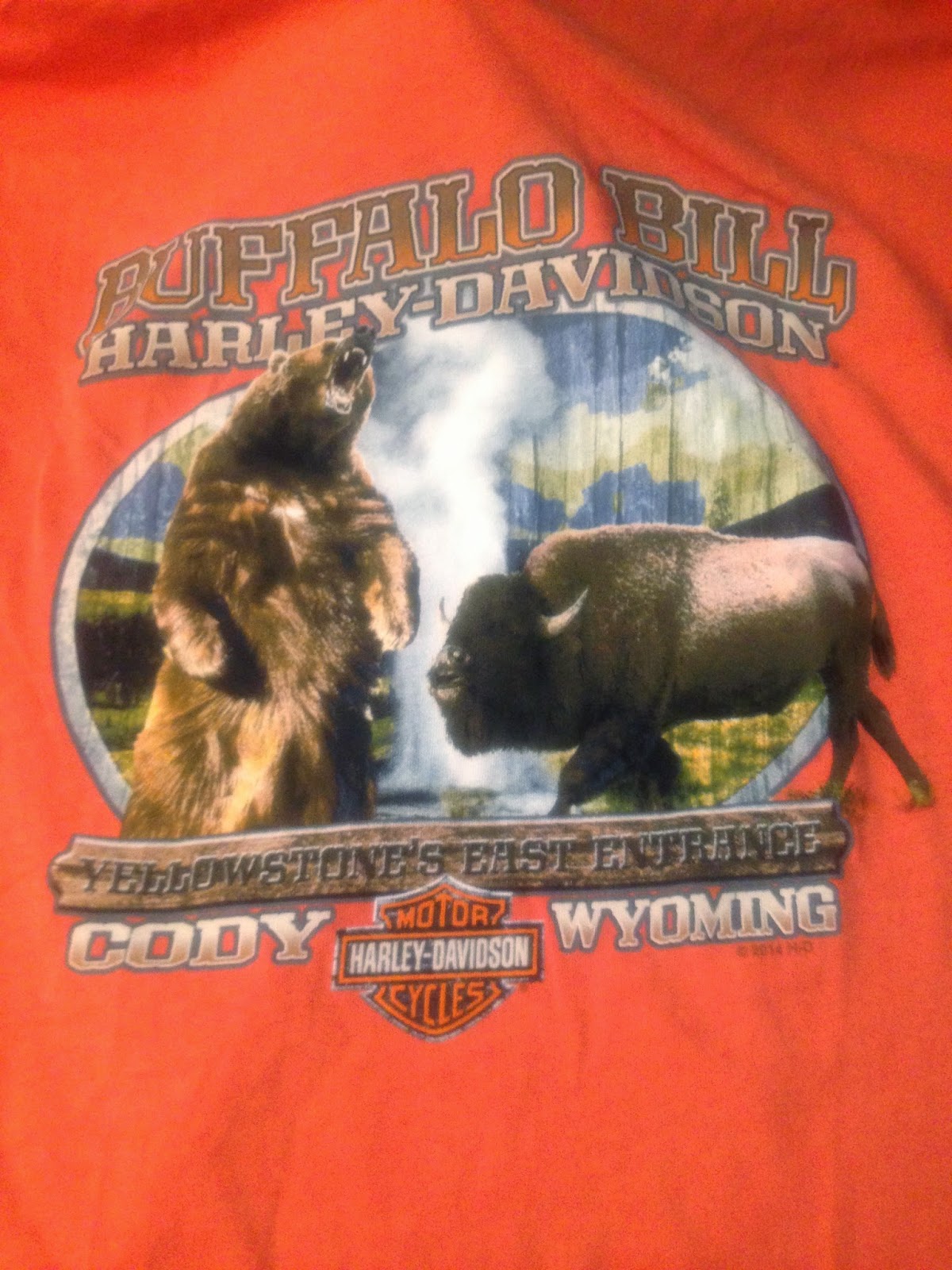 She also rode her motorcycle by Beaver Slide Dry Goods Ranch in Montana where they sheer their sheep and have the wool mule spun.....Darlene got me a cone of yarn from them and I love it!  She got herself one too and we are probably going to make the Ink Cardigan with this yarn (when we finish the other billion things OTN)...it is 1700 yards of complete awesomeness!!! 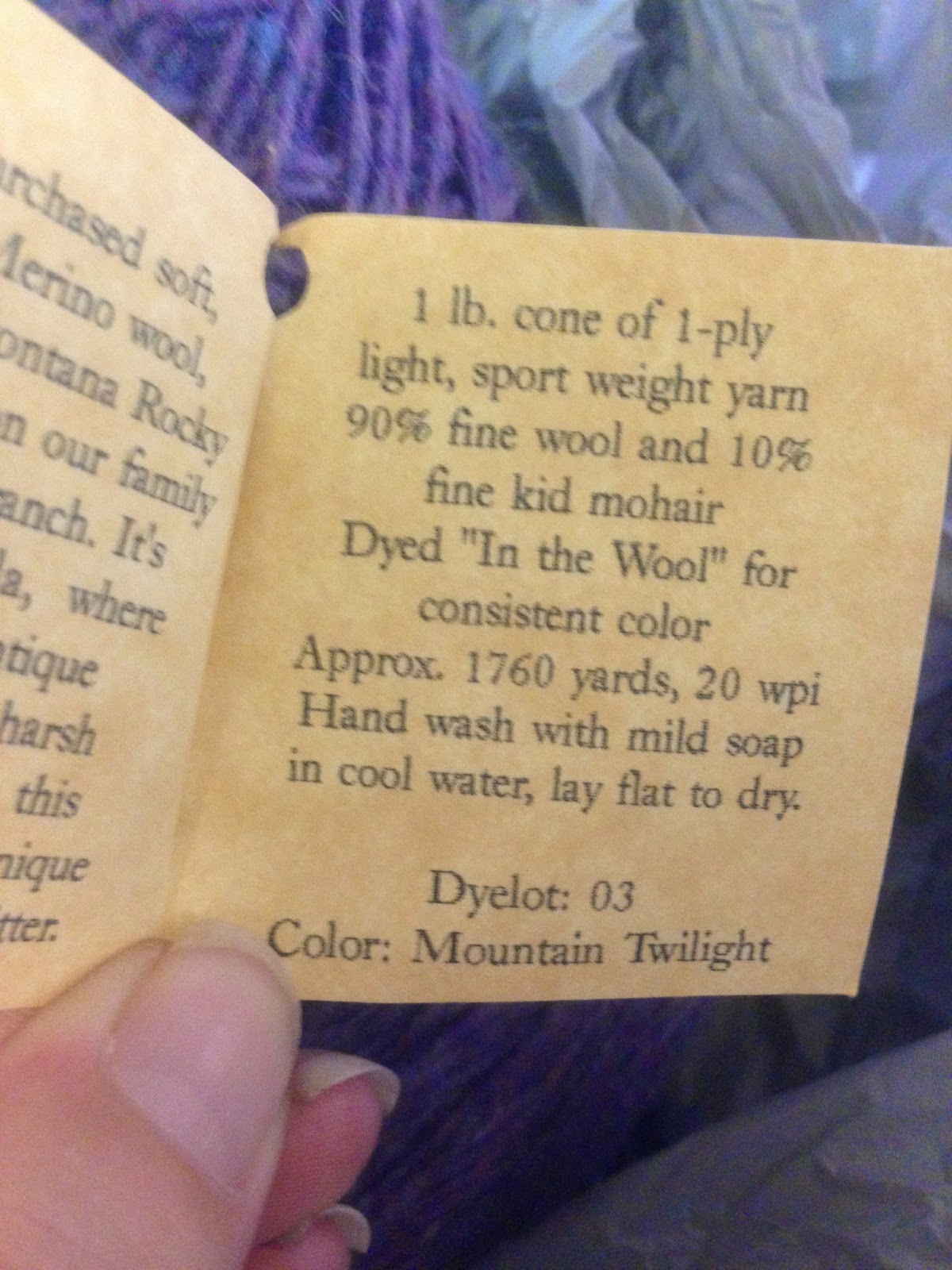 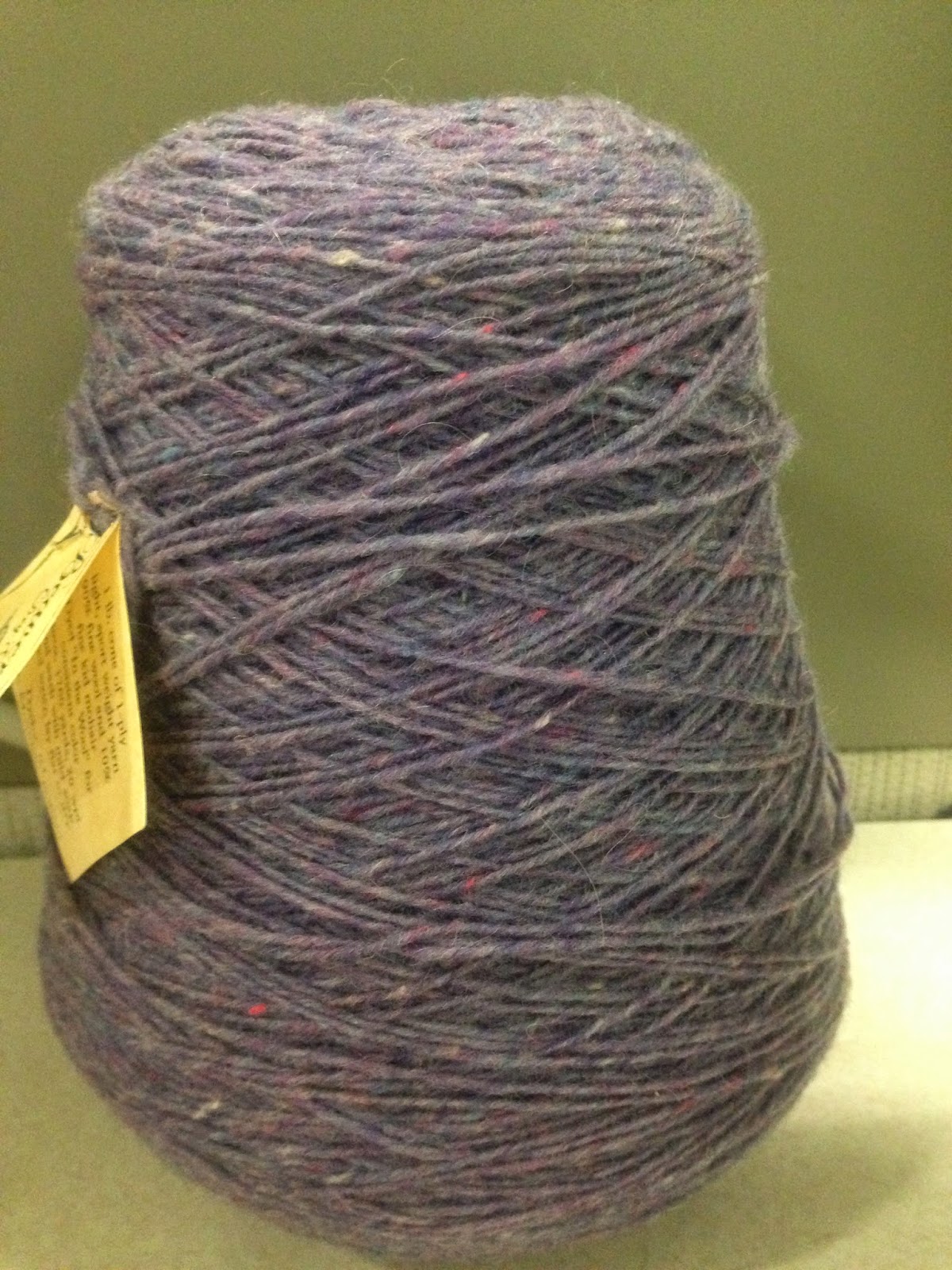 Speaking of Darlene....she will have some new bags in her shop soon....She has a new sized medium bag that I have shown on my blog before....it is the perfect size right between her big size and small notions size. They are 12" long, 7" tall, and 4" wide..... 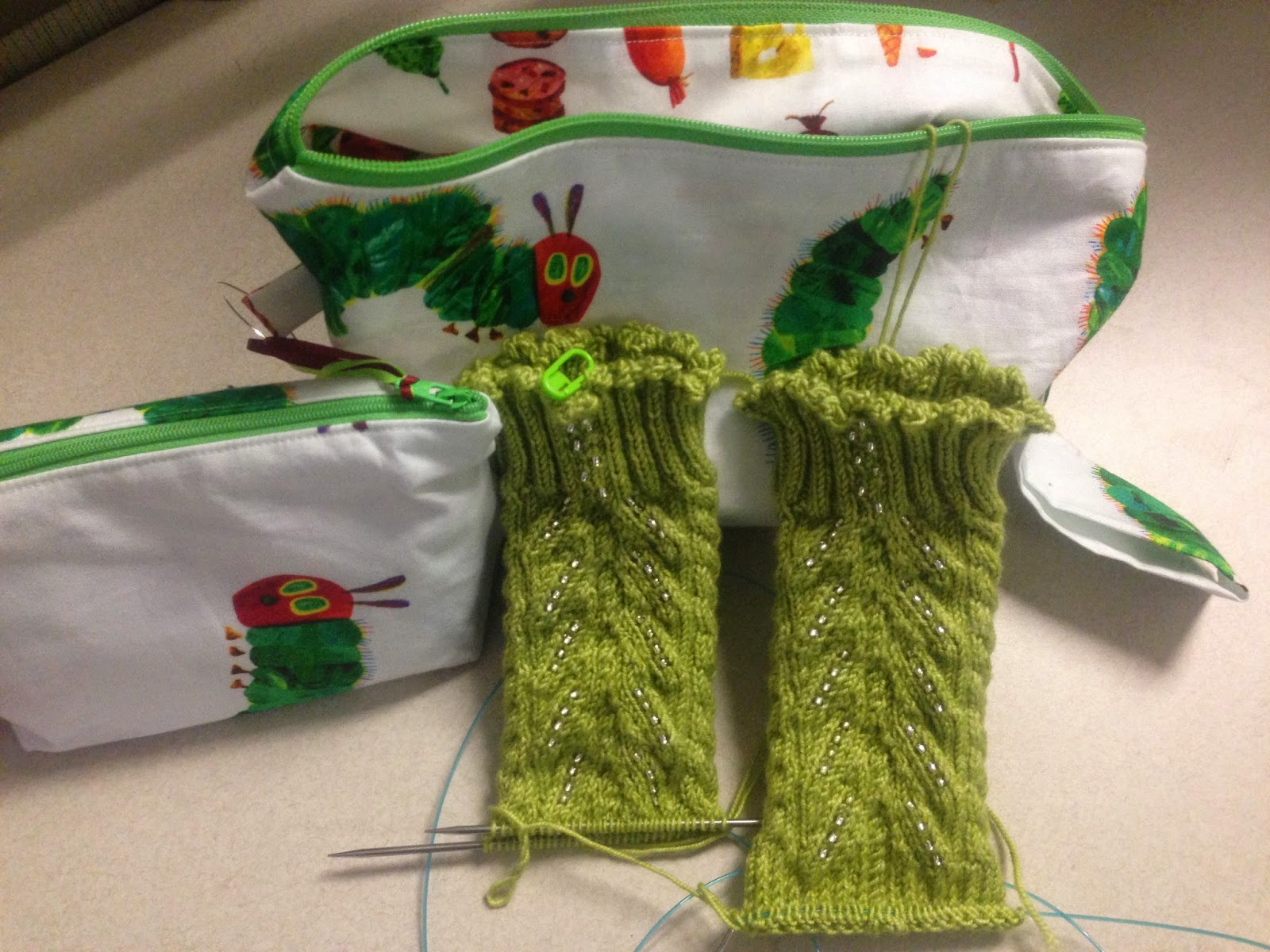 Now, she has taken that perfect size and put a dividing zipper pocket in it.....she is just so awesome....now this bag is going to a good friend, Paula H.....I am so jealous she is getting this bag...I hope Darlene has already shipped it because if not, I may steal it.....I know I will be buying some of these bags when she has them ready!  I am in love with this bag! 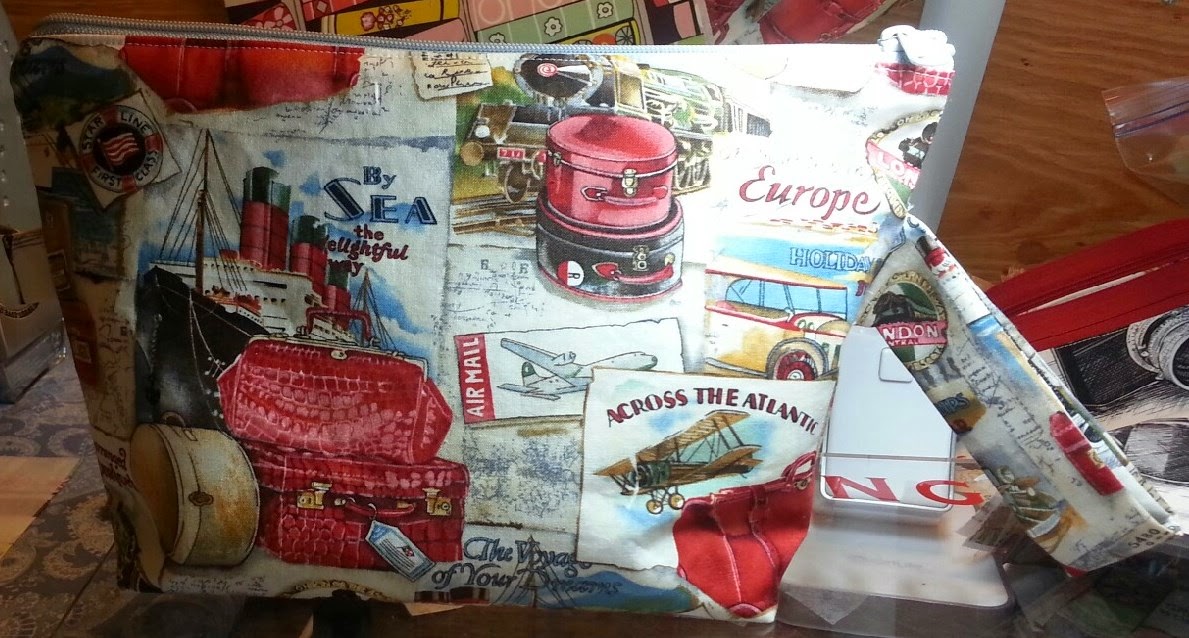 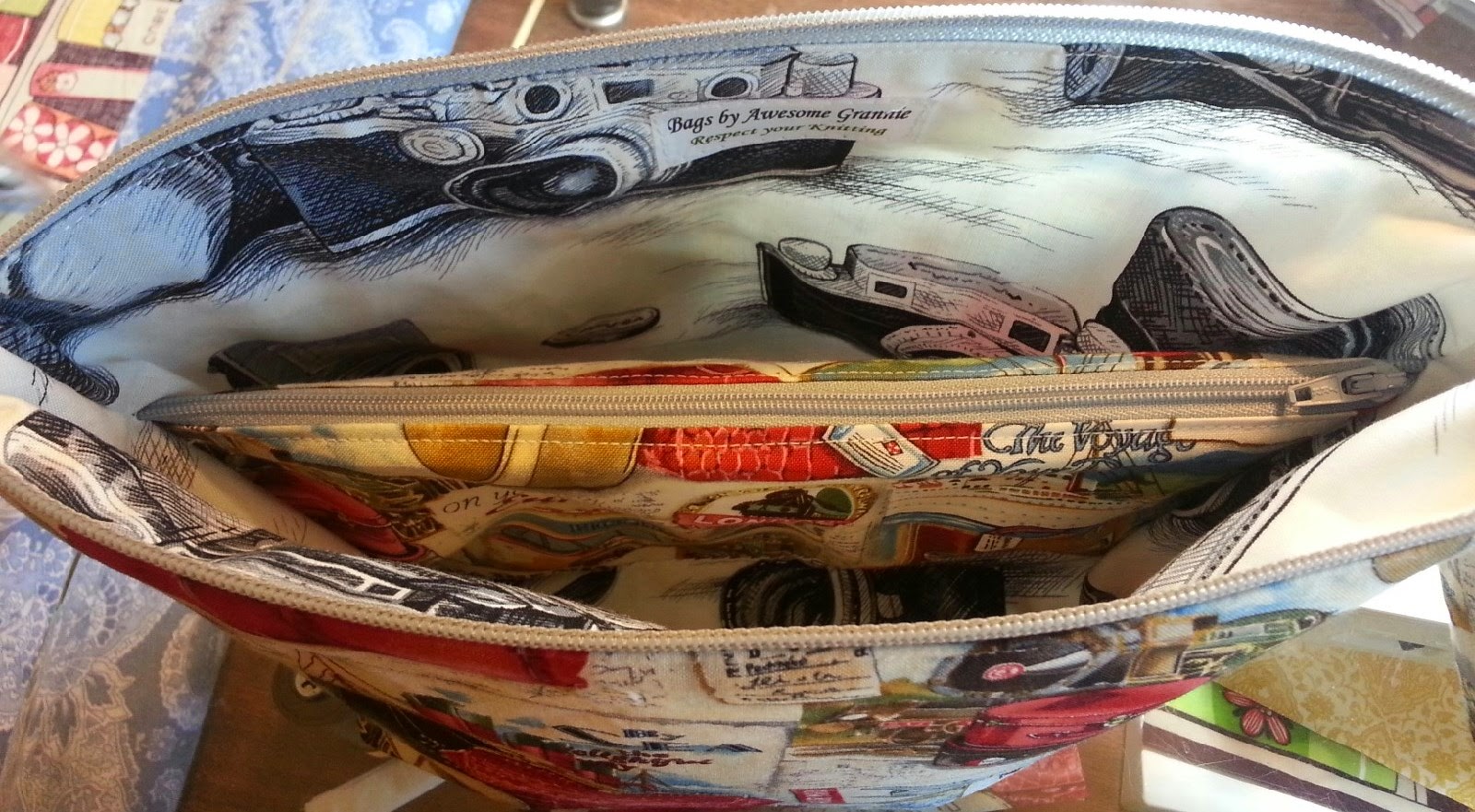 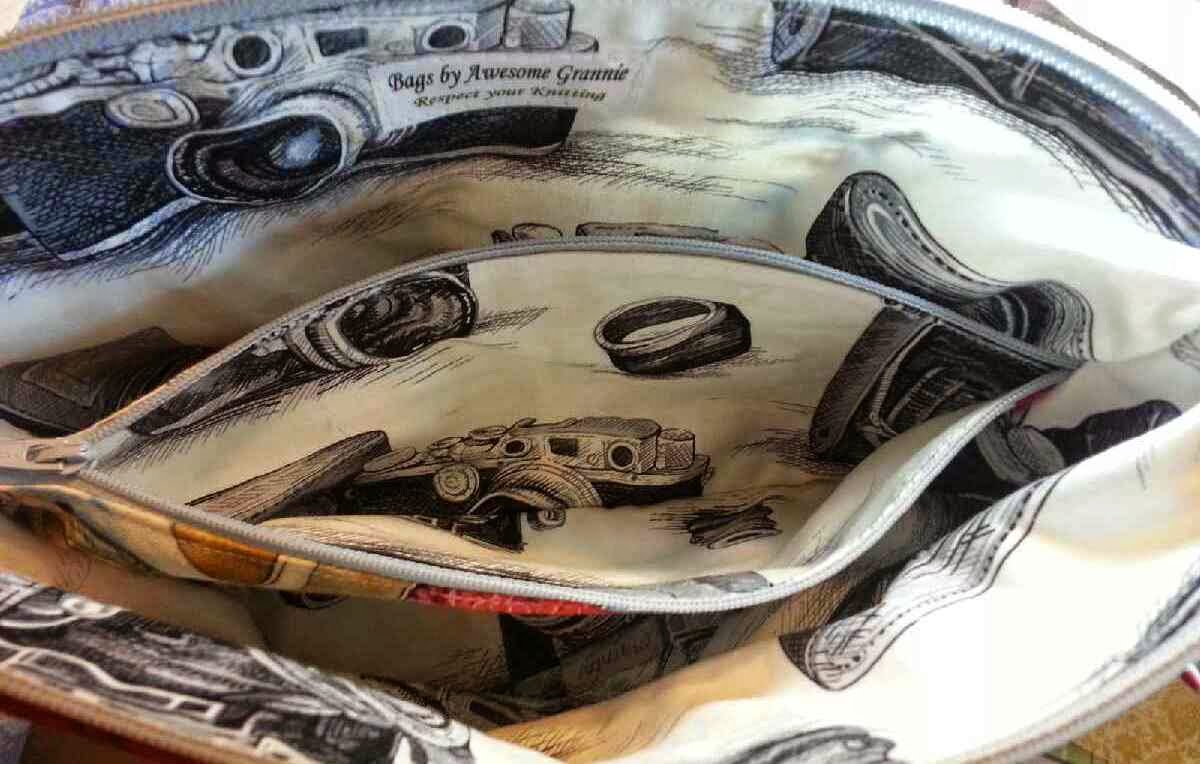 Okay....well, as far as knitting goes....all I really worked on was Paige's second placemat which I posted a picture of up above....oh, and the Hitofude Cardigan....Darlene told me that one of the girls from the Stockinette Zombies did the whole cast on with Judy's Magic Cast on...so I had already done the provisional crochet cast on and then I tried to pick up the stitches and it was a mess, and I tried again and again with no success, so I tried JMCO and I had a couple of errors so the last time was the charm (and it was also the last time because it finally worked)...I only have like row 1 of this cardigan done, but I have done row 1 like 4 or 5 times.....finally! 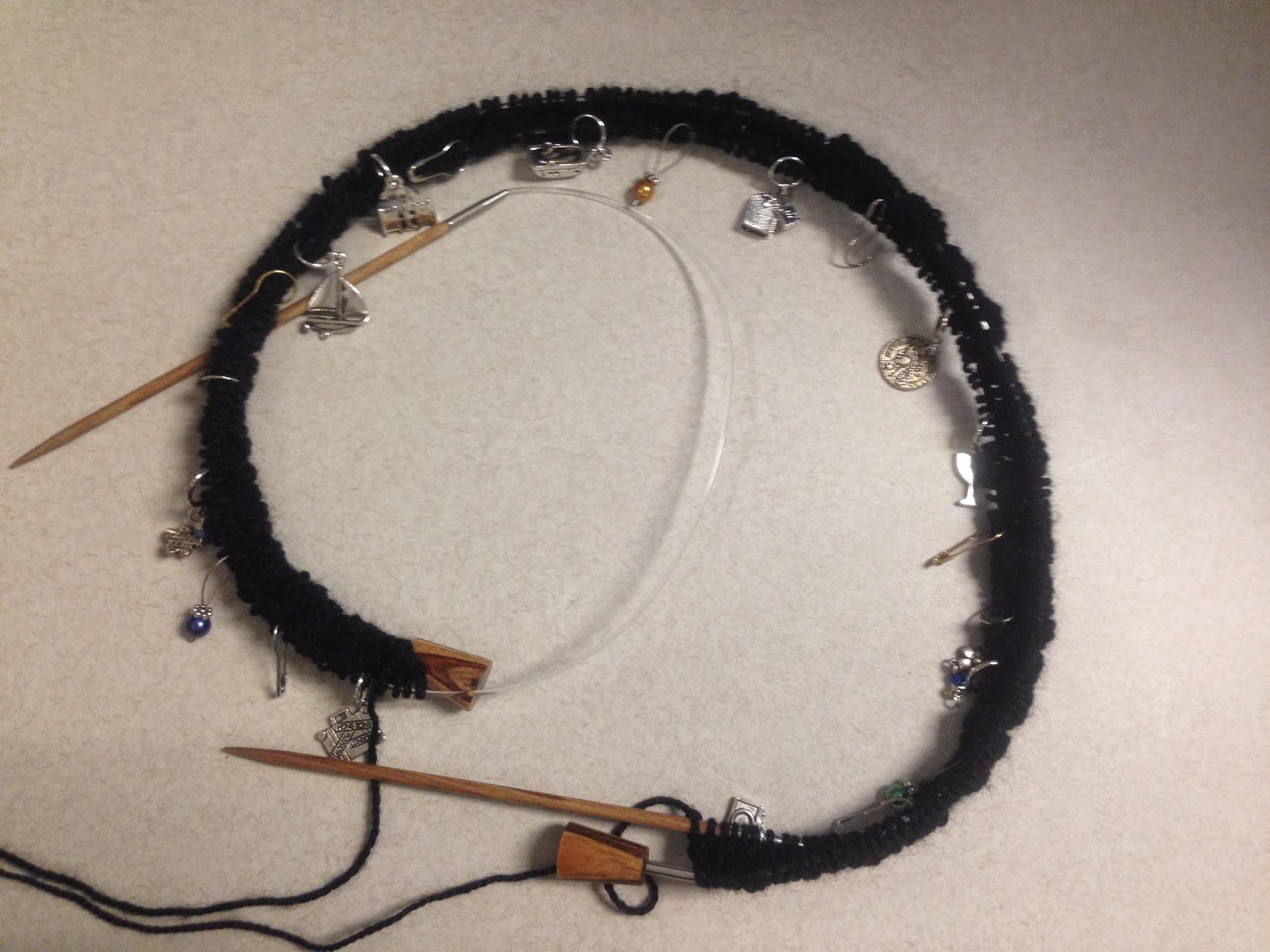 Lastly, I have two stash enhancements.  I saw this big skein of Katahdin on the Miss Babs website in colorway BFF a while ago and they only had one skein, I could not afford it at the time but I told myself that if it was still there when I could afford it...it was mine....and it was still there.  I love this colorway.....I have no clue what I am going to make with it, I just know I love it!  I wanted it to have more black, but it was the only skein and I still love it.  I also got two small yummy toes skeins in the same colorway for a pair of socks! 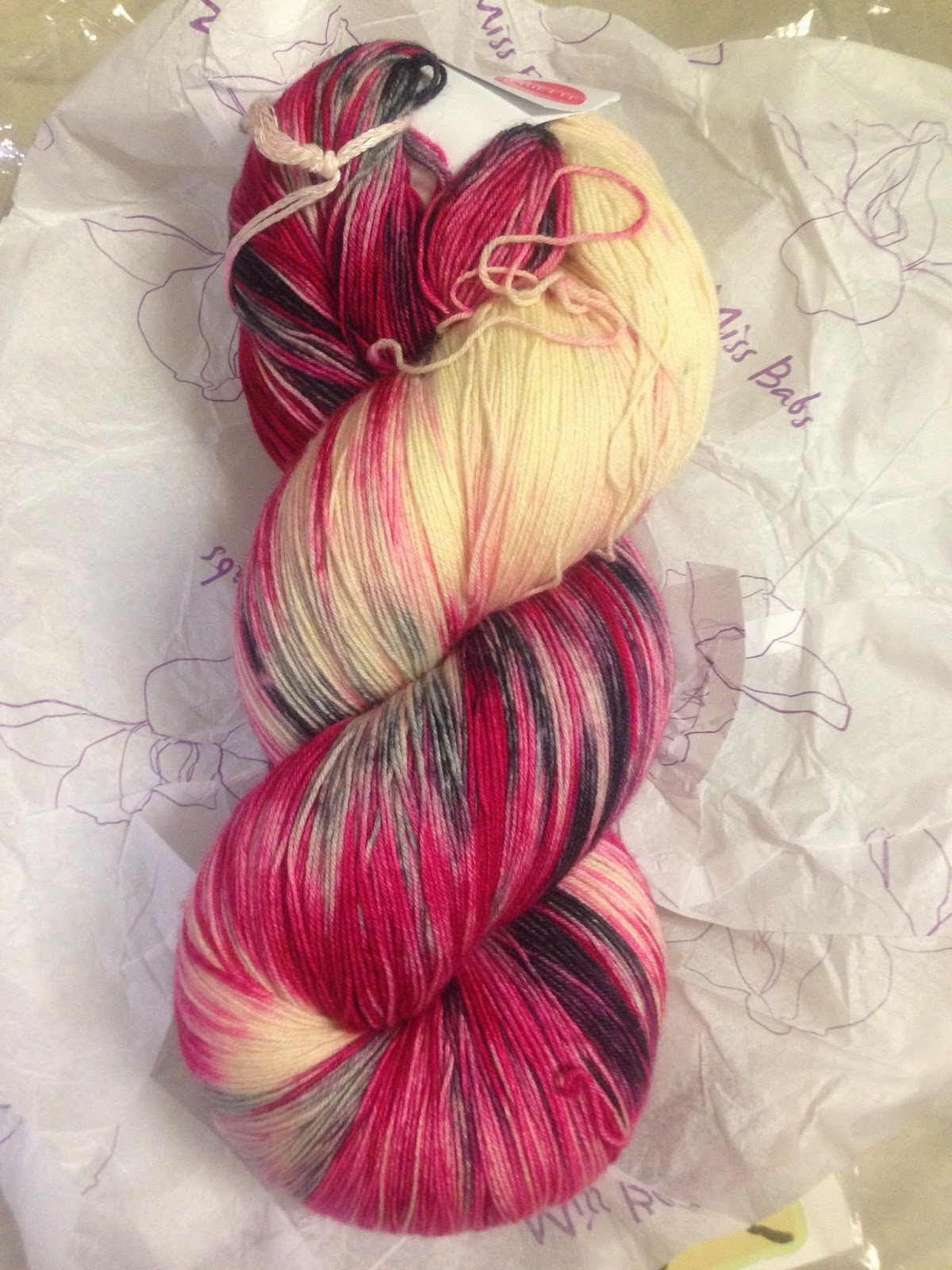 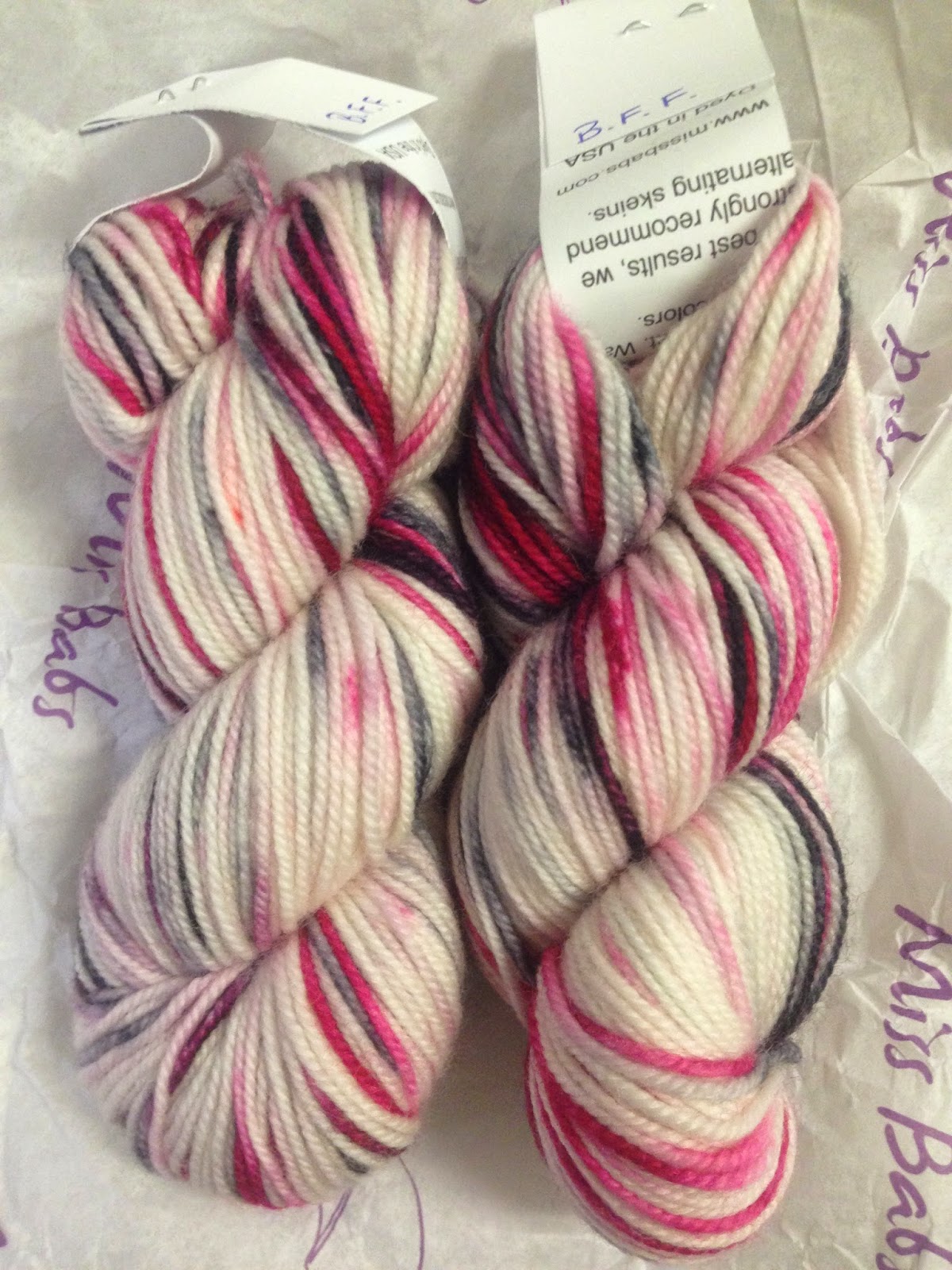 Well, that is about all I have.....I know it is not much knitting...but I hope to have more for you next week....since on Friday I can start my Camp Loopy #3 project and I am anxious to start it!

Since I got a little bit of exercise this weekend...here are some of my thoughts on exercising 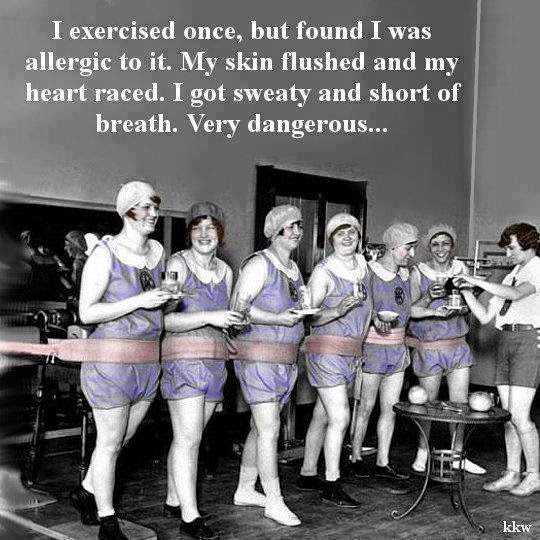 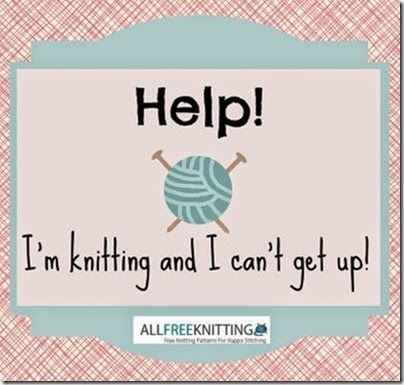 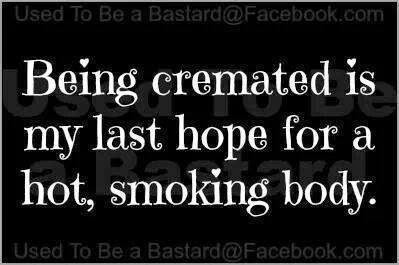 Happy Happy Happy Knitting everyone!
Posted by Knitphomaniac at 8:02 AM