Look at me slacking again.....it has been over a week since I posted and I really want to try to stay on a weekly (if not more often) schedule.

Remember the Strickmich! Yarn club I joined?  Well, my package came it.....Yahoo!!!!!  I absolutely love it and I am casting on tomorrow for the shawl for the Ravellenics...it is one of two projects I am doing for the ravellenics. 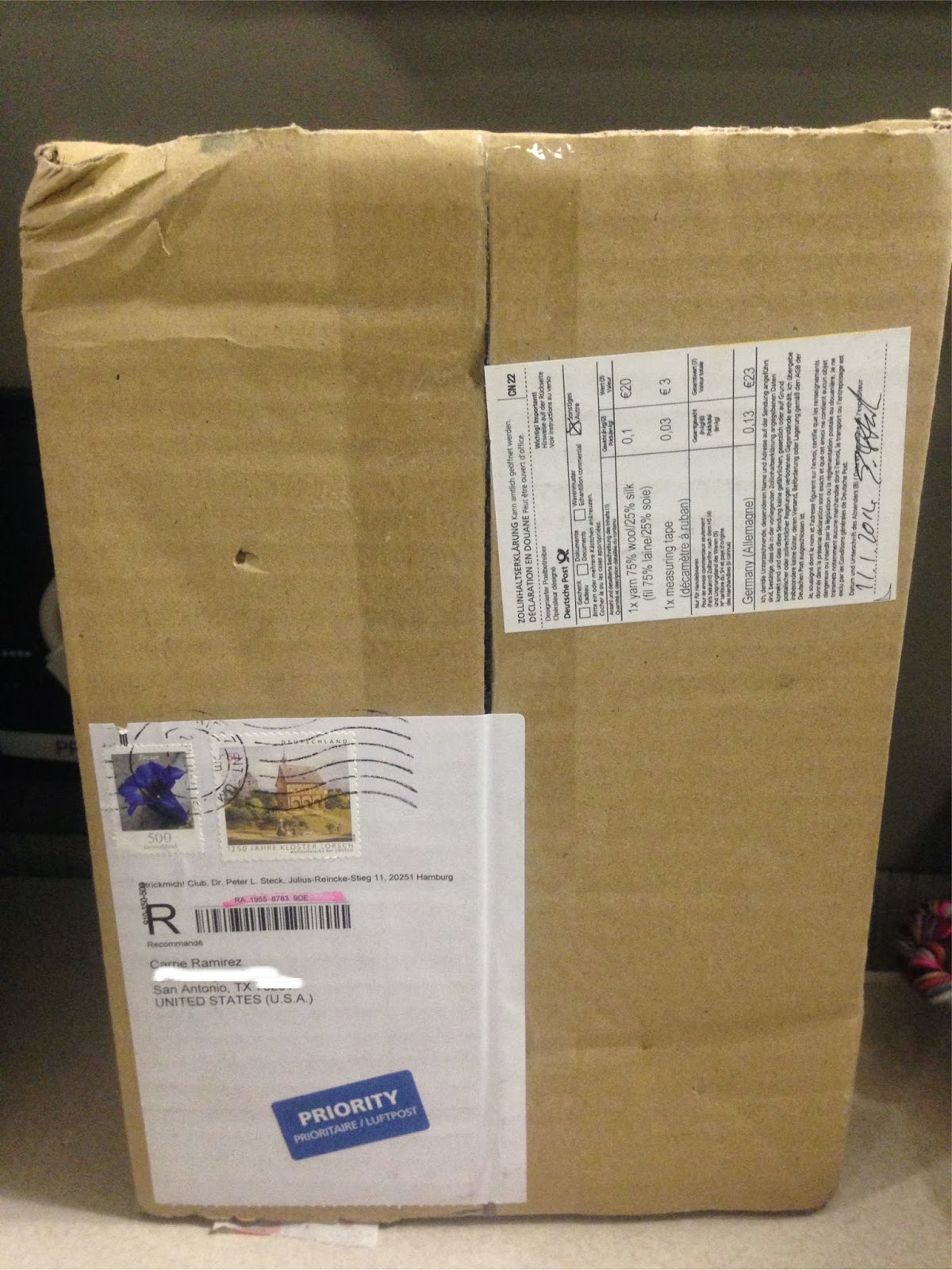 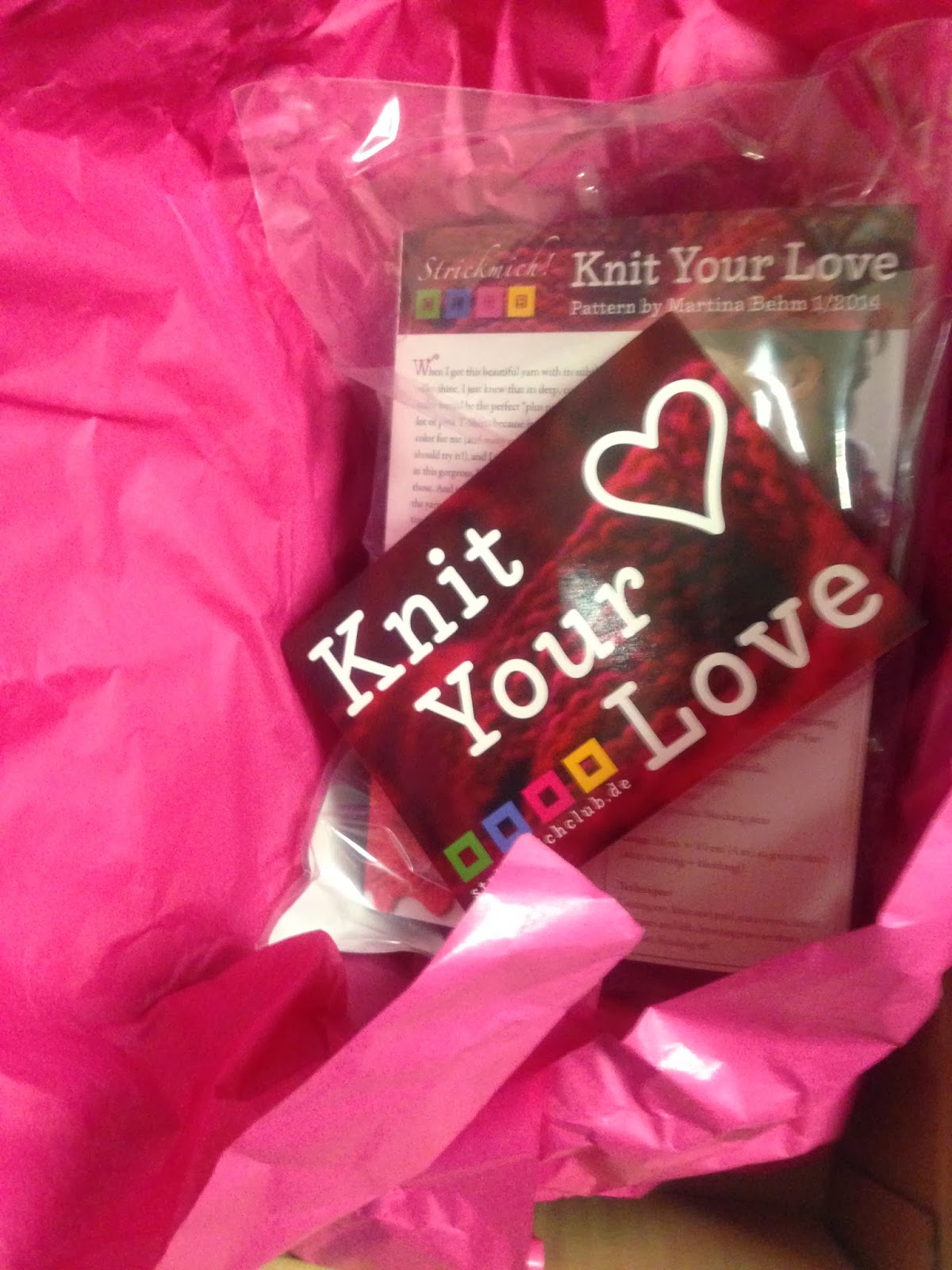 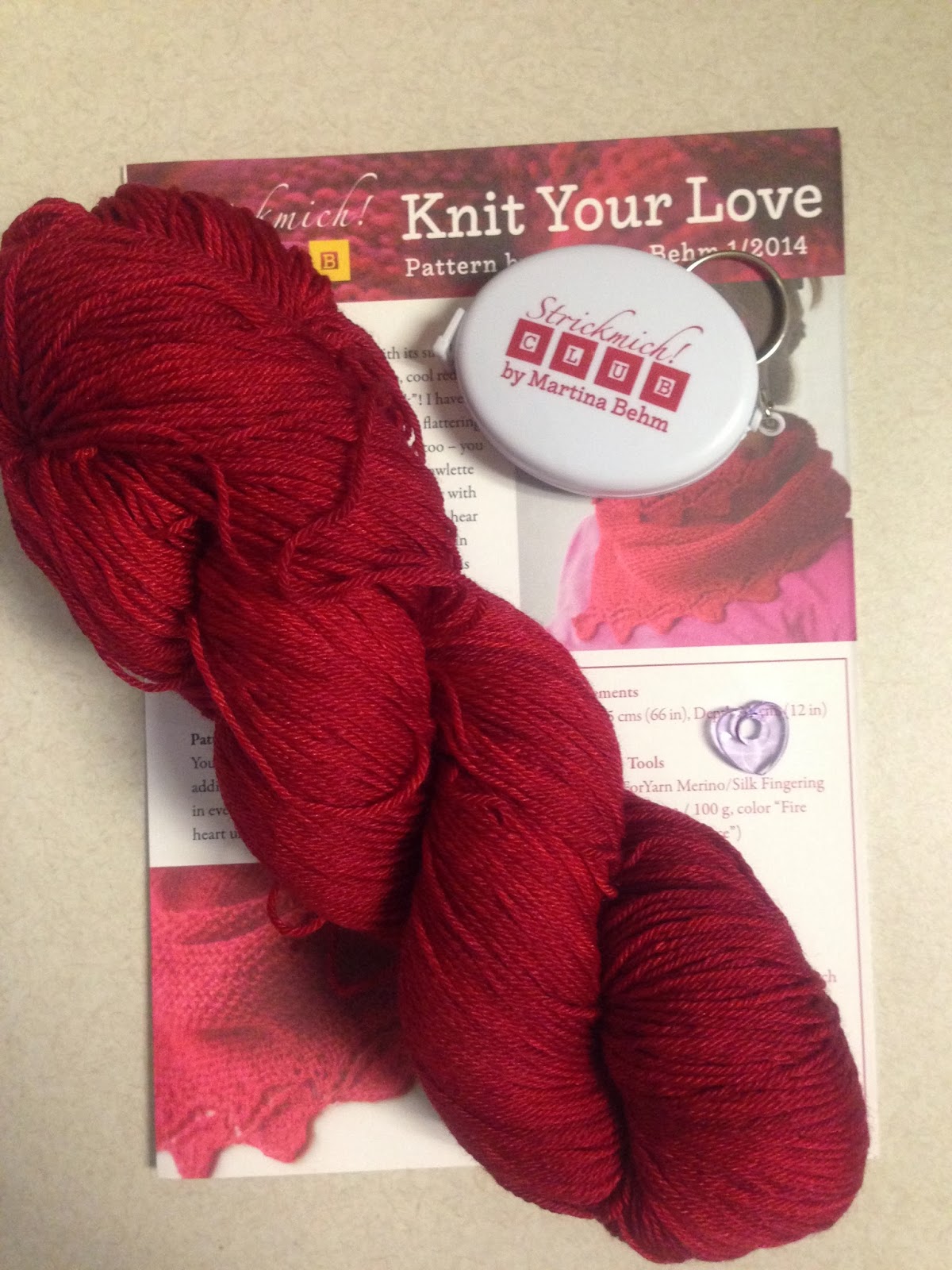 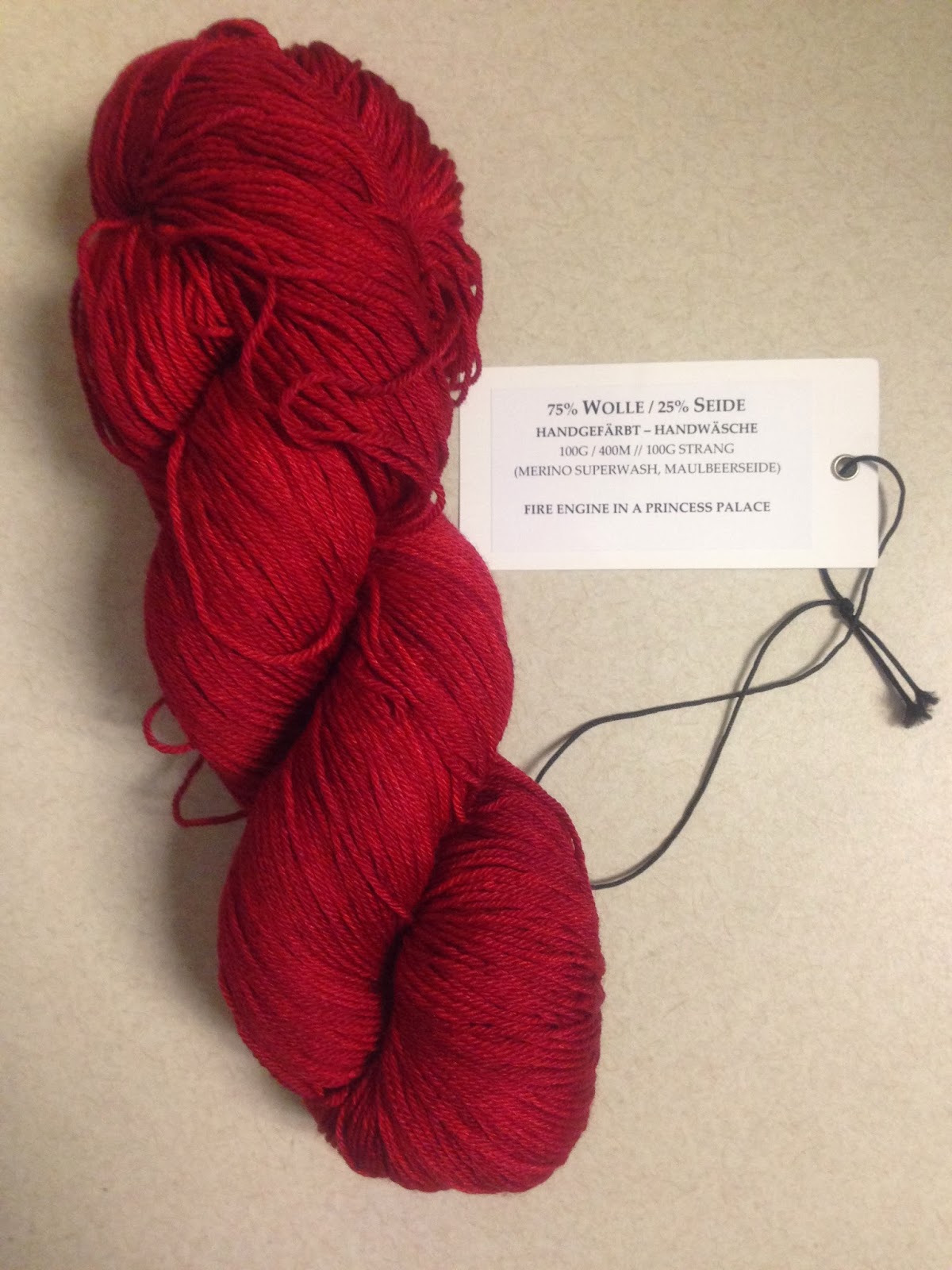 And, my Suzi shawl is ALMOST DONE....I started the bind off, but want to finish binding off tomorrow since this will be a WIPs for the ravellenics.....maybe a bit sad that I am waiting to bind off, but I wanted at least one WIPS project in there.....ha, ha! 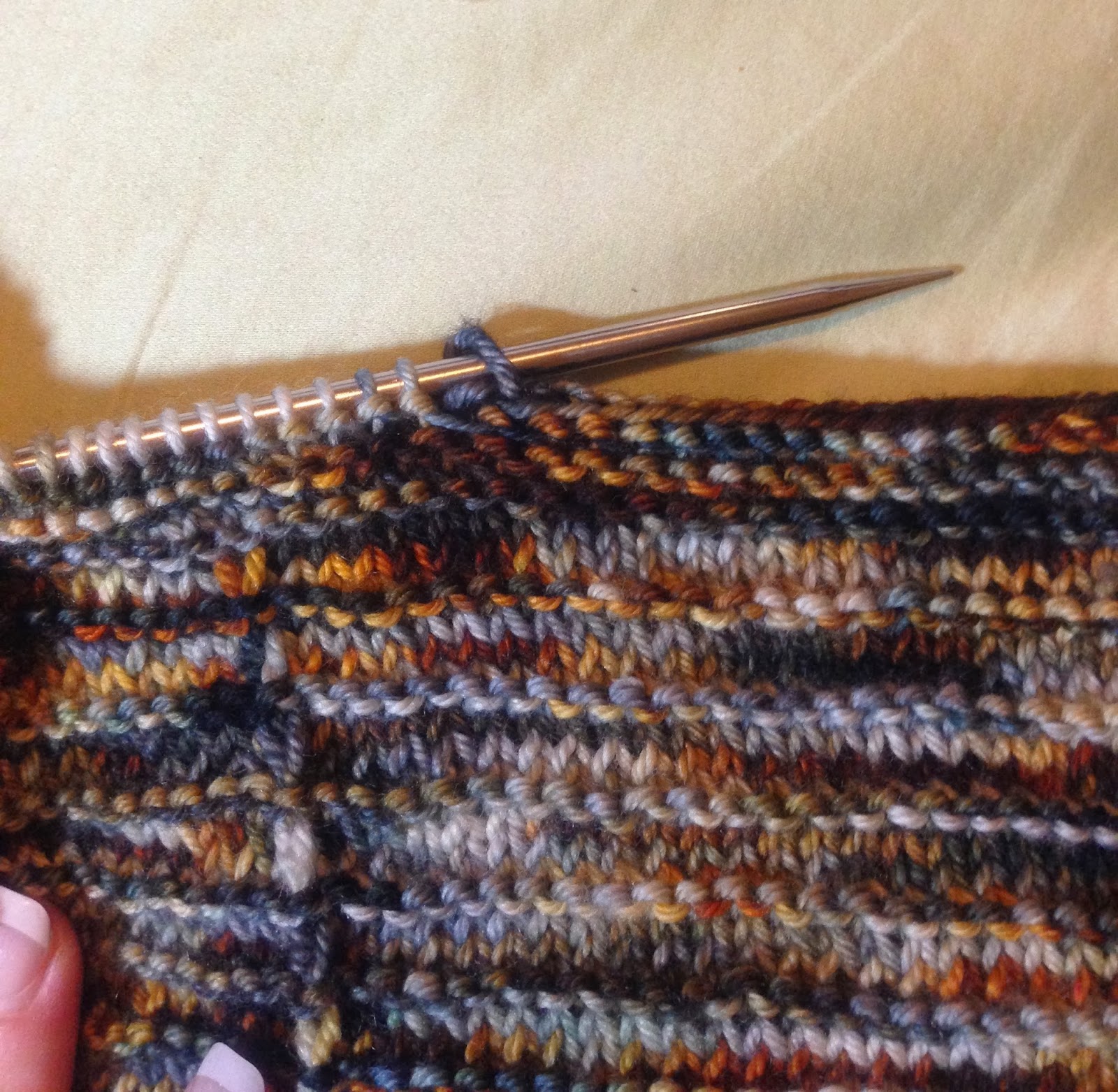 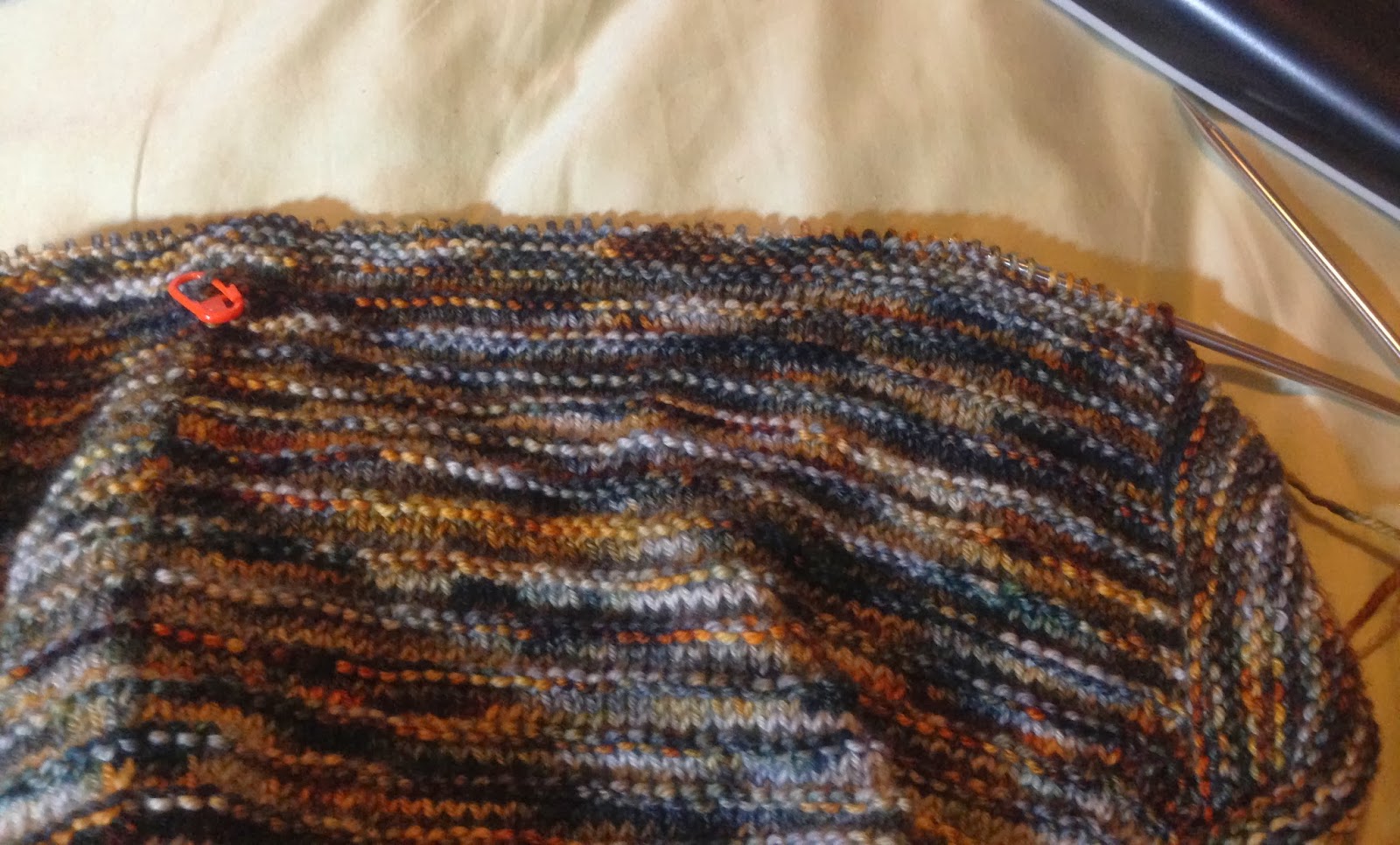 So, have any of you heard of Darn Pretty Needles?  There is like a 9 month to 1 year waiting list for them..... I ordered 2 sets almost a year ago....then, I was able to find a pair on a 'For Sale or Trade' thread.  I tried them and was not all the hip on the wood (I think I have mentioned several times that I love metal needles).  Well, my first set that I ordered was finally mailed and delivered, and it was just in the midst of my hypercrazy madness.....there are SEVERAL double yo's in the hypercrazy pattern and I thought if I try my wood needles, it might help....well, I could not have been more right.....I am really digging these needles....the join is HEAVEN!  never a snag....I do tend to unscrew them a bit as I knit and if a stitch gets stuck in that, I have to get it out, but other than that....these will be my new go to needles for lace patterns....I ordered some extra long cords for hypercrazy and I think I will also put my log shawl on these needles. 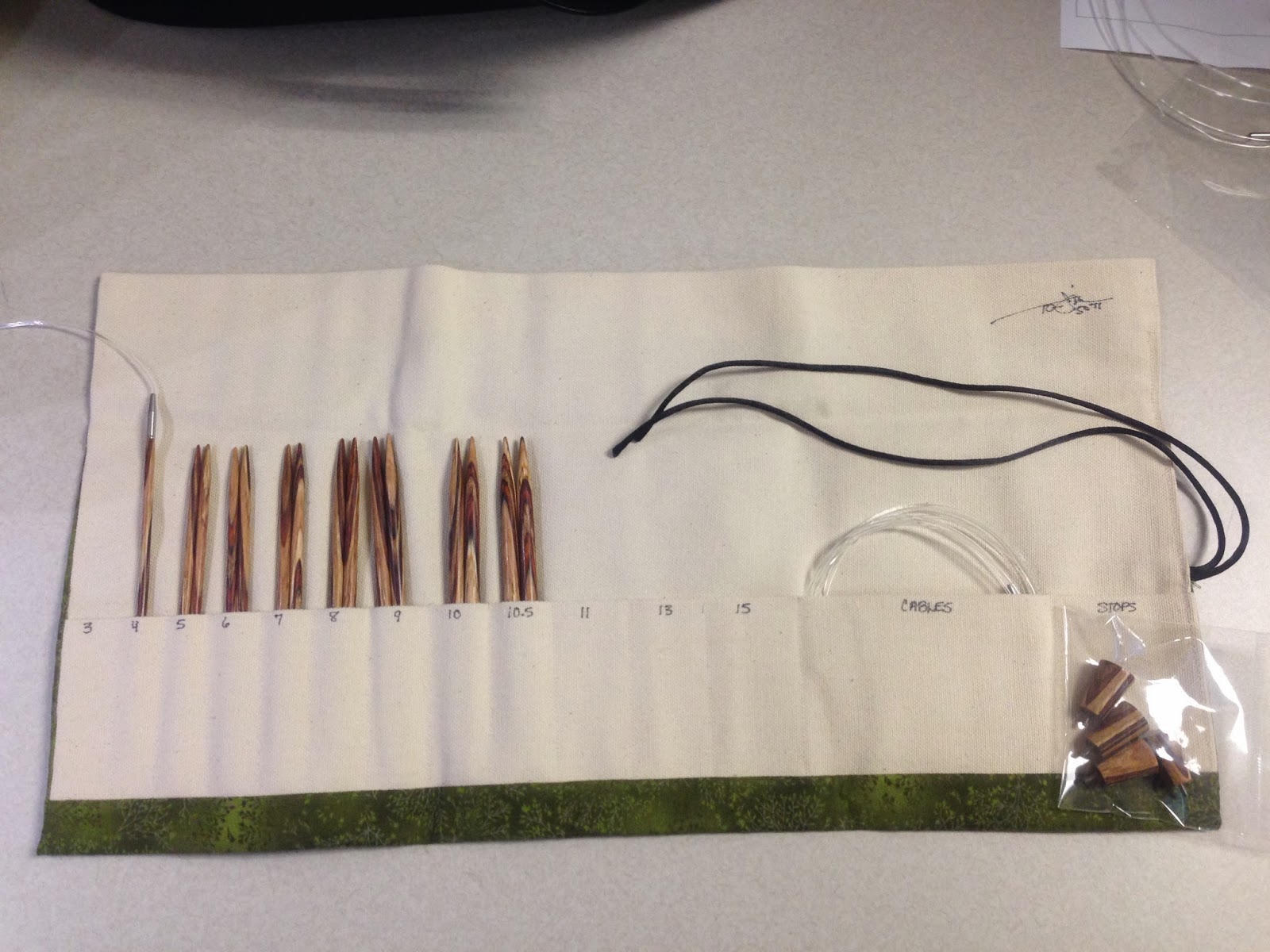 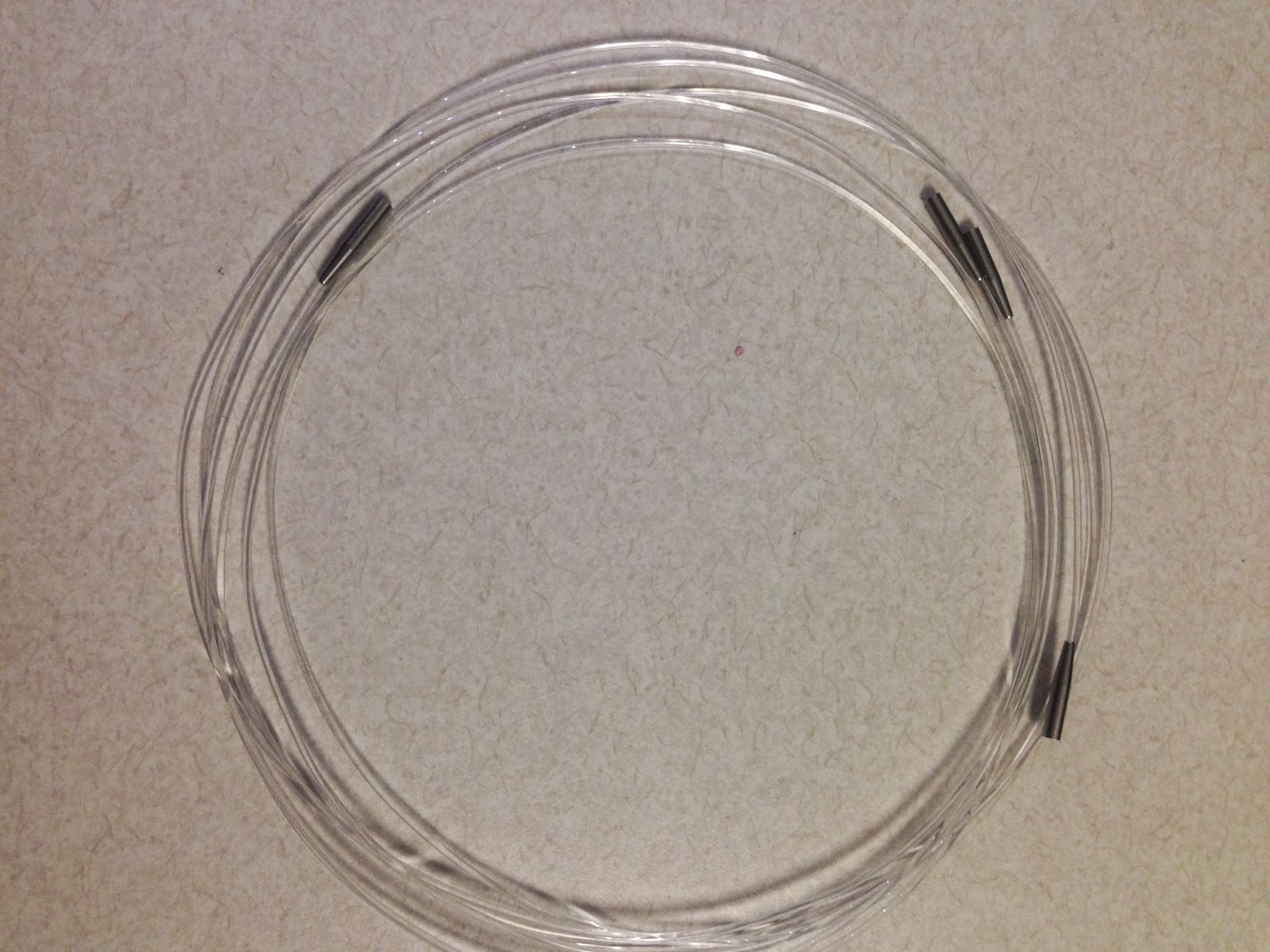 This was the set I snagged on the trade thread that was quickly snagged by a friend of mine once I got my hazelnut color in (she really loves the Vermont Apple).....this set is Vermont apple and Tortoise....my last set on order is chestnut with a lace tip that I probably do not need anymore, but I ordered them a long time ago. 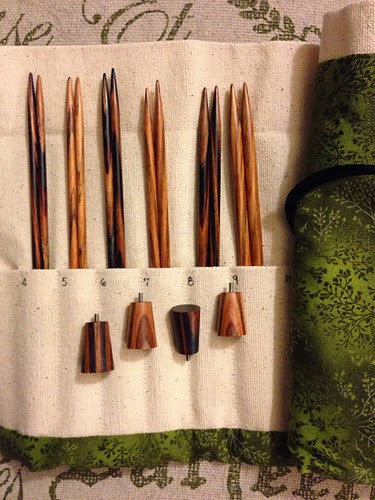 I am actually surprised at how much I am enjoying these wood needles....here is my Perfectly Wreckless HyperCrazy on these needles: 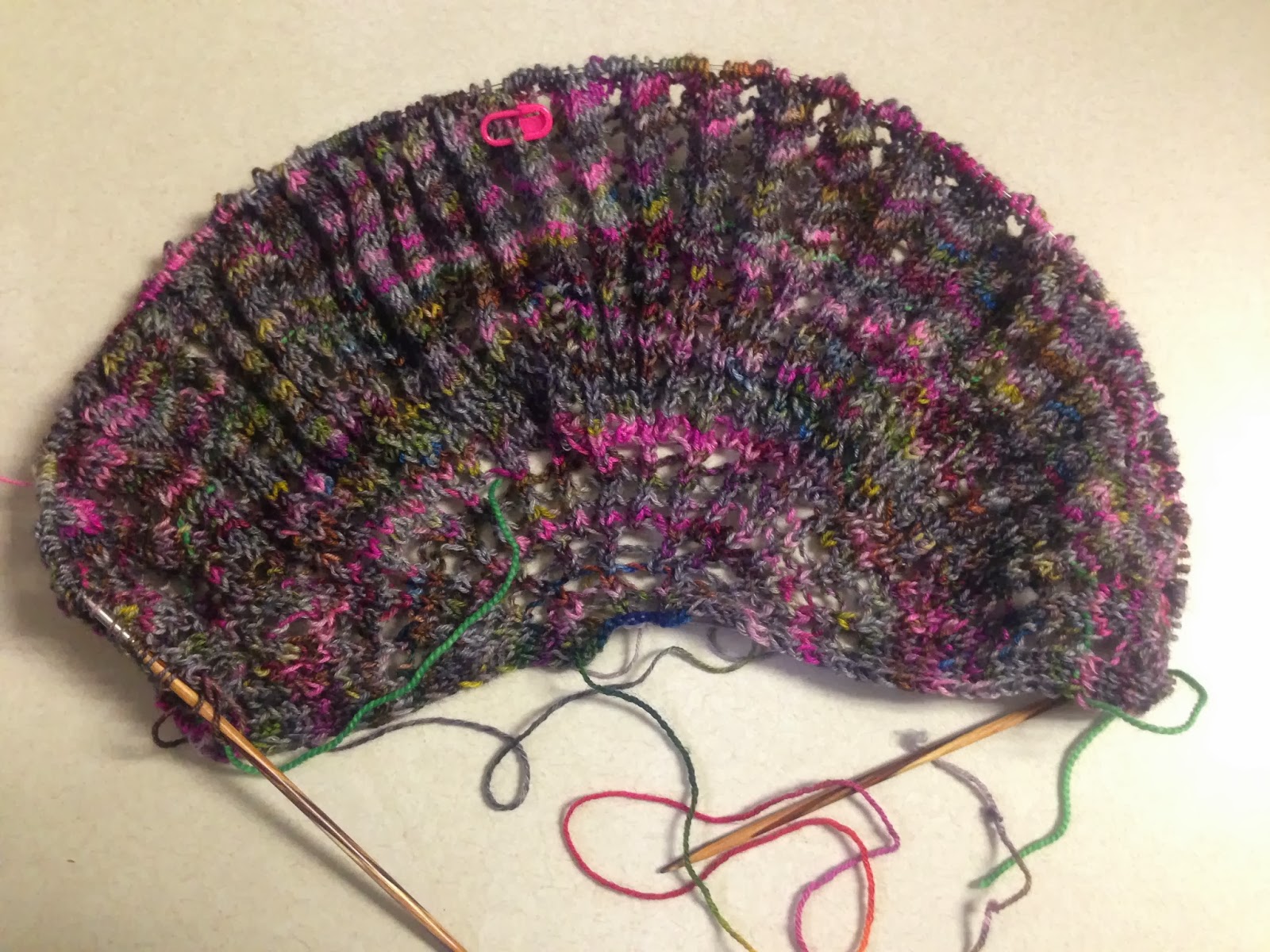 So......I am sure that many knitters are not die hard football fans, but I am....I love my longhorns!  I also love the Denver Broncos....one of my best friends, Ailene, married a man from Denver and he is probably the biggest Bronco fan you will ever meet....she had pictures on her facebook of her whole family in orange and blue face paint and the dogs were wearing orange and blue bandanas.....it was a seriously sad loss!!  I am not sure if the team that played in the blue and orange uniforms were the real broncos.....they certainly were not the team I watched play all year......I was really looking forward to the game and Jaime invited the bromance Alex and his wife Marie over.....Marie enjoyed watching me knit on my suzi shawl and said she loves her wrap that I made her (I think I mentioned it a couple of posts ago).....Jaime BBQ'd some wild hog all day on his big BBQ pit and it was like melt in your mouth awesomeness......this (and the knitting) was the best part of Super Bowl Sunday!!!! 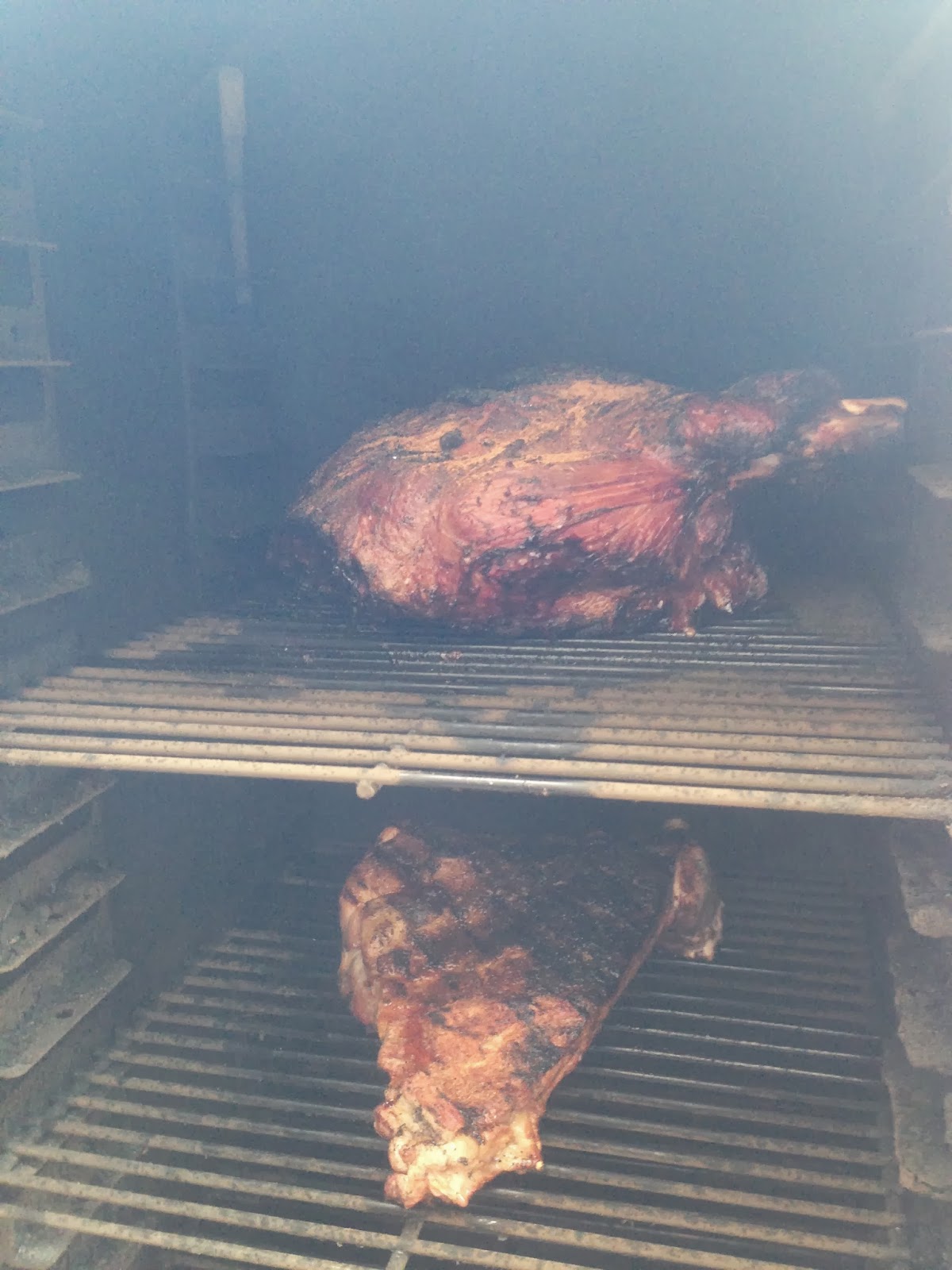 It was another cold one here in SA.....there was white stuff on my car and in my yard.....it is called grapple, this is actually a new word I learned on the news today....it is apparently snow that has ice all around it and looks like little balls.....kind of that like ice cream you can get now that is all little balls.....it was pretty neat! 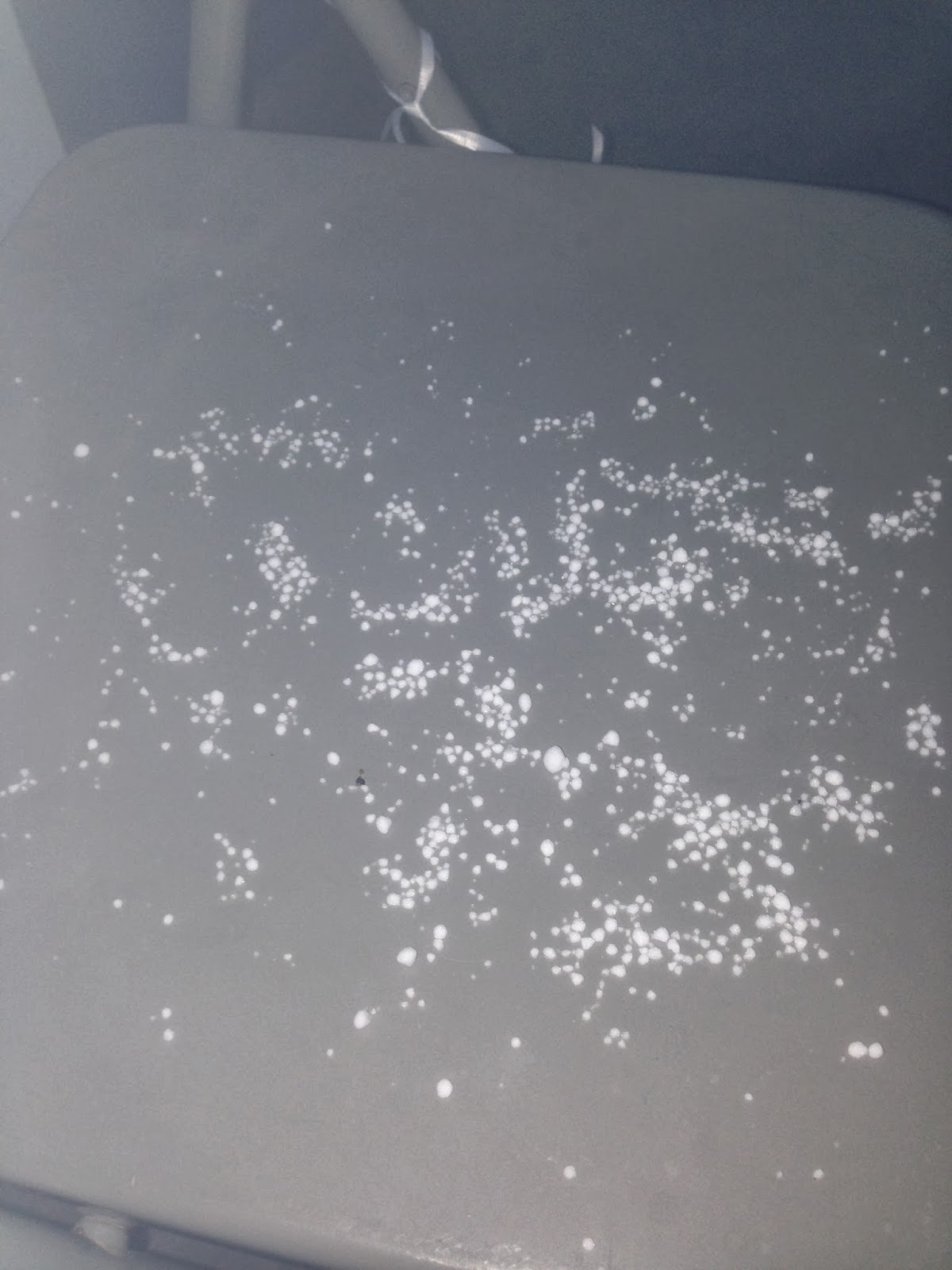 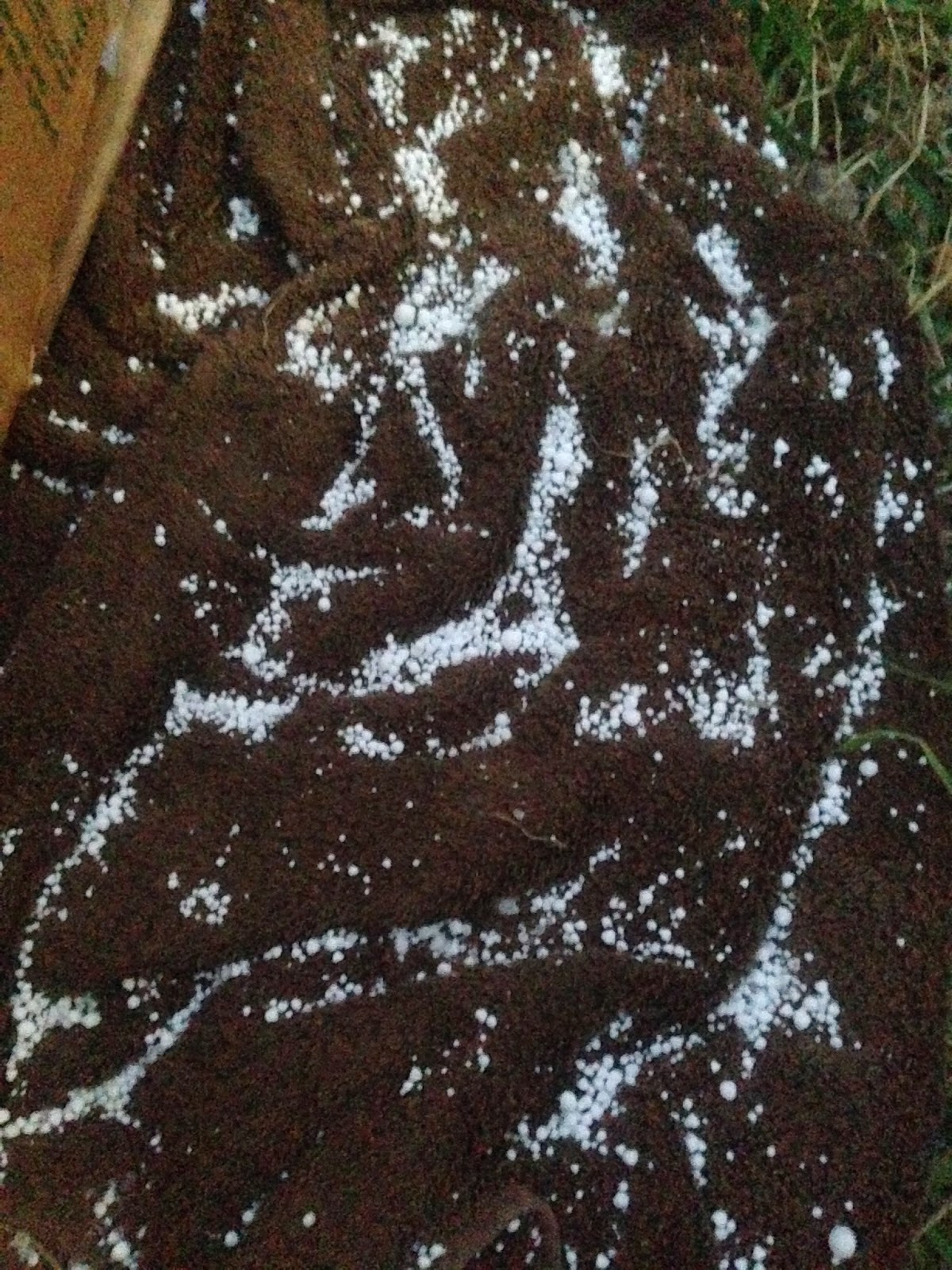 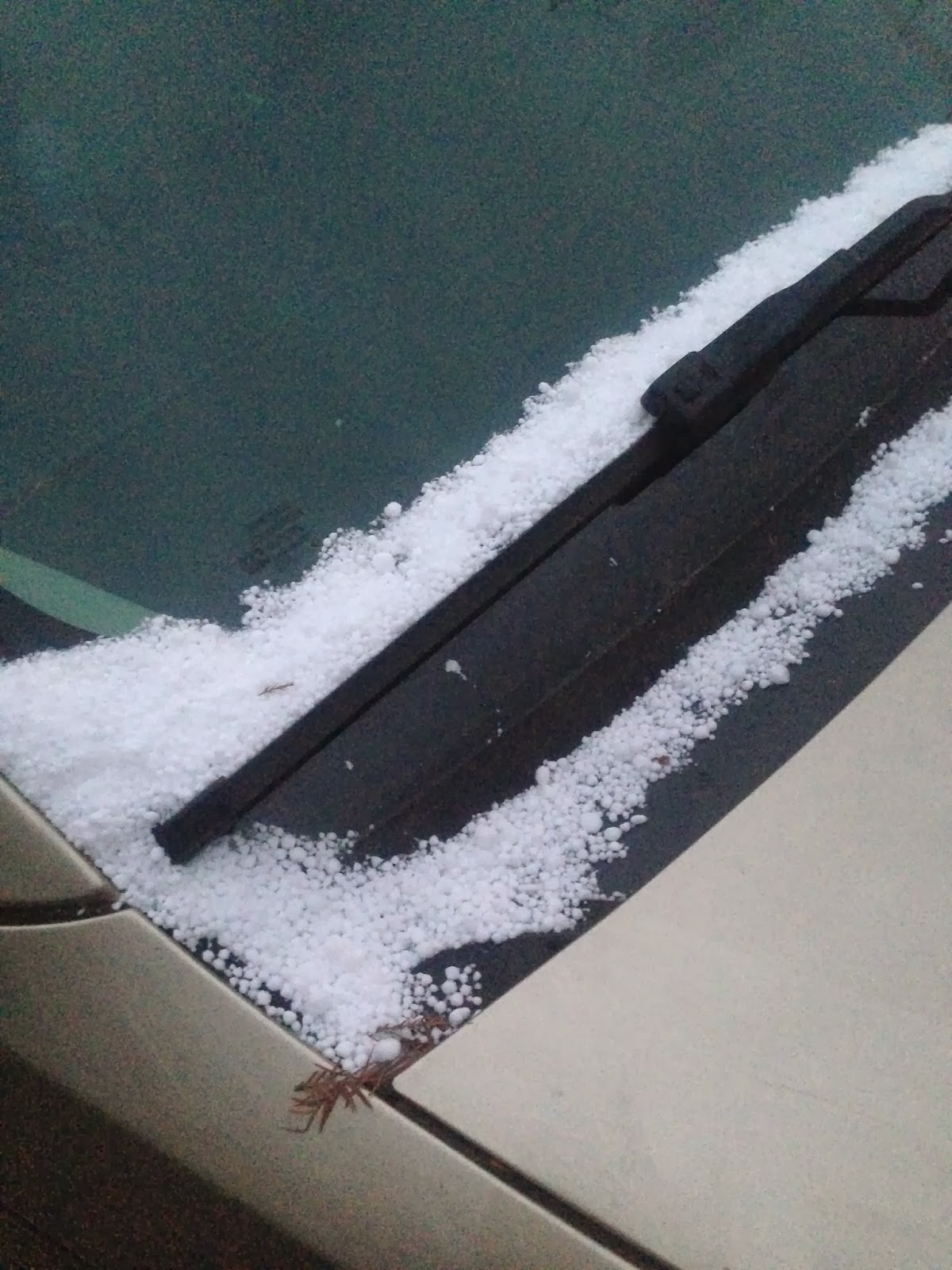 I leave you with a couple of great pictures.....one is a picture of my daughter (Paige), granddaughter (Celeste) and grandson (Antonio)....the second is a great saying about knitting....I had a friend contact me with some cute knitting sayings....so I will share a few over the new few posts....this one I especially love because I have become quite a selfish knitting and do not want to for anyone but me (how sad is that?)!!! 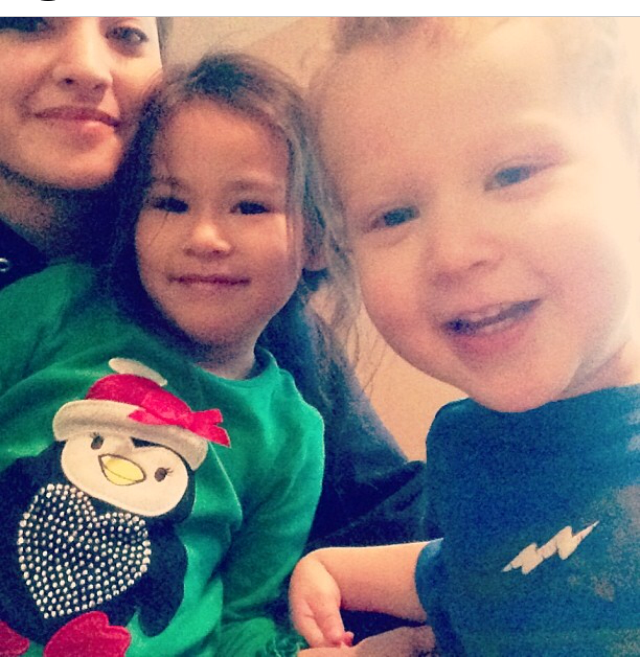 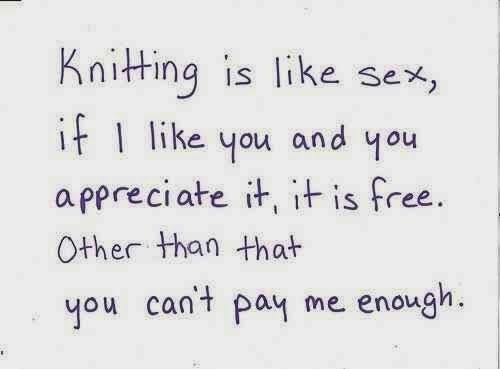 Posted by Knitphomaniac at 9:09 AM