Startitis Hits Again, but so does the frogging.......

Happy Happy Tuesday everyone!  How was your week?  Mine was good....I got some knitting in, so that is always a good week!

I did however run into some startitis and frogging.  You know my awesome Nuvem...that I started over a year ago?  Well....I think it will probably hit the frog pond.  I have not frogged it (yet) but I started a new Nuvem.  It is still with wollmeise lace garn, but it is a more true black.  The first one was with a color called Heavy Metal and the second one will be with one called Schwartz.....The reason for frogging you ask?  Well, look at the increases.....I am not sure if you remember, but I had the same problem with my Viajante (In this post) and I frogged it and went with kfb instead of backward loop.  Well, that is what I am going to try with Nuvem.  I did try make one right and make one left increases, but I think I like the kfb better.  I cannot seem to bring myself to frog, so I figure if I get this next one far enough along (maybe to the same spot) it will be easier for me to rip-it all out!  Here are pics of the soon to be frogged Nuvem and a picture of the new big honking skein of yarn on my scale...it is about 309 grams (once you subtract the weight of the lazy susan). 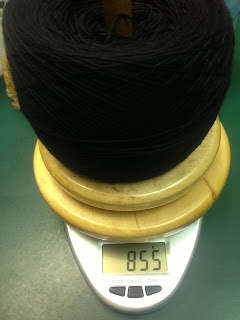 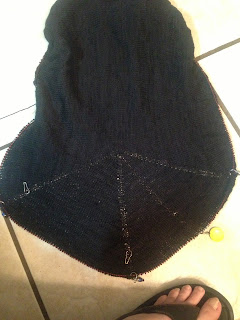 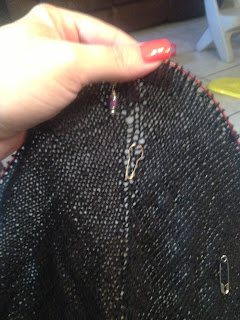 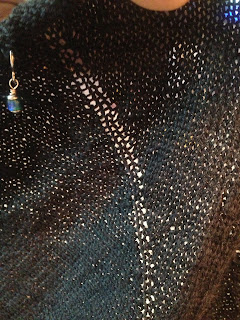 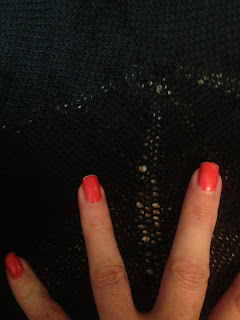 I finished the third and final (three times' a charm) crochet bag...but I still need to crochet the handles and flowers. 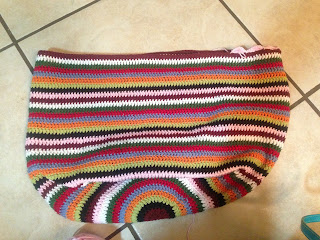 I also started a new hat.....I was looking at the Dead Or Alive fish hat (Steph from The Muststash Podcast is making 2) and I saw a bunch of nemo colored ones in the projects on ravelry....so off to order yarn and cast on....I tried to put it on Antonio and he was not having it...so my knitting may be wasted on this project. 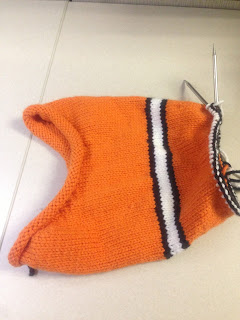 I have also been knitting on the super secret Scarf Swap Scarf...but I cannot share those pictures, so I will share a picture of some Stash Enhancing.....there was a lady destashing some wollmeise on ravelry that I just had to have...it is WD Saami. 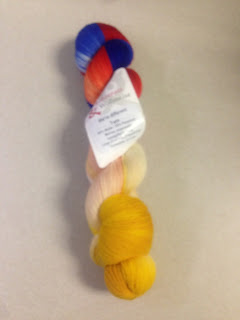 Did you notice how I kind of blamed the whole Dead or Alive fish hat on Steph from The Muststash Podcast?  Well, one more thing to blame on them.....they have a give away from Unic Designs.  Natalia makes these awesome project bags (Yes, I know I am a little addicted to bags....get over it!).  She donated the cutest Double Bubble project bag as a give away and I saw the bag on the podcast and just had to have one (I do hope I still win....one can never have too many bags!).  I emailed Natalia and she made me one....I LOVE IT!!!!  Isn't this the cutest material ever?  Thank you Natalia!  Natalia said I can share a 10% off coupon with you guys.  Use Discount Code LOVEUNIC for 10% off. 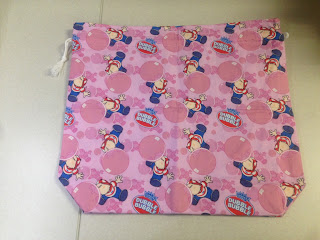 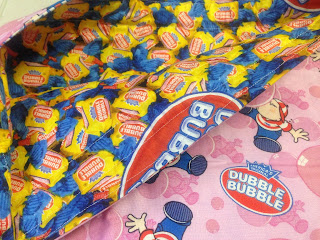 I have mentioned my knitting sisters in a group called "The Lonestar State Knitters" (LSSK).  Well, this is a group of exceptional women....I have become good friends with a lot of them.  One friend, Ruby, it just beyond exceptional.  She is one of the ladies that got me addicted to The Loopy Ewe (TLE) with Camp Loopy last year.  Well, TLE has these reward levels for how much you spend with them (too much for me) and I had made a comment to her about how I really wanted to make the next level so I could get the TLE coffee mug, but of course finances are always tight and it would be the most expensive coffee mug ever....so what does this awesome lady do?  She sends me one (she had 2 and one was not being used)!!!!  On top of that, she sends me 3 skeins of yarn and an awesome book!  She sent two skeins of Madeline Tosh Prairie Lace yarn in Copper Penny and Moccasin and the skein of Navy yarn that came with the mug and The Yarn Whisperer by Clara Parkes.  Ruby, I could never thank you enough!!!!!!!!!!!!!!!!!!!!!!!!! 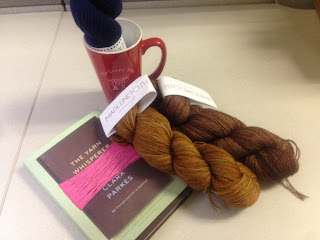 I had two of my grandkids this weekend....Celeste and Antonio.

I leave you with a picture of Celeste and Antonio playing...I had both of them with me this past weekend! 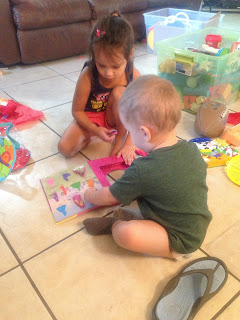 Happy Happy Knitting!
Posted by Knitphomaniac at 7:43 AM