Hi everyone.....Here is my first ever pattern written out.  I was given a protoype of a fish (in the picture) and I had to reverse engineer the pattern.  I mentioned it last Friday that someone needs these knit and is willing to pay for them (she will aslo have recurring orders).  I have decided not to knit them right now because I have so much going on with Camp Loopy and The Ravellenic Games starting this coming Friday, plus I am doing two more test knits (yes I am crazy....hence the title of my blog, knitphomaniac!)  For now, I have passed this opportunity on to my knitting friends and I am waiting to see if any of them want to do it.

I was so excited to have my first ever pattern written out that I decided to put it out here for free....enjoy!


Kfb – knit into front and back of same stitch 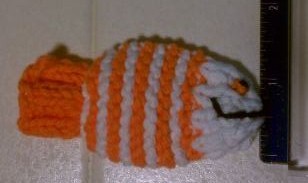 
Do not cut yarn between colors, run yarn along side.


Cut Color string with about 3” tail to weave in later


Cut yarn with at least 3” length.


Now, for the long white tail between the tail and body of the fish, thread the yarn on a tapestry needle, run the needle through the stitches on the back of the fish that meet between the body and the tail, this will help tighten the yarn to make the fish tail fan out better.  Once those stitches are tight, weave in ends to where the yarn is perpendicular to the stripes of the body, this will help enforce where the tail and body meet.


Shape and block as needed.


Happy Monday Everyone!
Posted by Knitphomaniac at 8:27 AM