Setting goals with the Magic Scale!

Happy Happy Monday everyone....I have not been able to knit as much as I wanted to this last week.  I did finish crocheting the second awesome big crochet bag and gave it to one of my best friend's for her to line it with material for me (she sews and I do not even own a  sewing machine).  One of the things I did not like about either of these crocheted bags are the flowers....they are a pain to crochet.....but here is a pic of my bag and my 4 flowers for this newest bag. 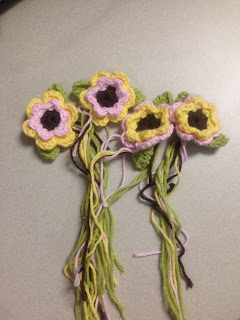 Well, Darlene is kicking our buttox's (is that a word?)!  For this next part of the story, I have to take you back to when I was knitting Viajante.....do you remember how I said I did not know how big the Viajante would be so I had no way to set up a goal to knit per day (to finish by a certain day) except going by weight....so I made myself this little calendar that showed me what my ball of yarn should weigh (in grams) by the end of each day.  I was behind a few times, but always caught up because I knew where I needed to be with my little calendar of grams.

So, Darlene and I were talking and she was worried she would not finish her Groovy in time for Camp....so I told her that since we have 3 skeins of yarn, and there are 31 days in August, to be on the safe side, we would need to finish a skein of yarn every 10 days.  She was at the end of her first skein when we had this discussion.  So I told her to take her second skein of yarn, weigh it, divide the number by 10 and that is how much she had to knit per day.  He skein weighed in at 117.5 grams which is 11.75 grams per day....round that up to 12 grams per day and she would be good to go.

Well what does she do......she goes to town!  She loves watching those numbers drop on the yarn scale (she calls it a magic scale) and she knit one whole skein in less than a week.  I know......can you believe it?  She has about 56 or 57 grams till she is done and we are not even to the 20th of the month (where she should be finishing her second skein).  I am telling you, setting goals is always helpful!

I am only on my second skein and I do not think I will finish it tomorrow, but I sure will try (so I can make my goal). 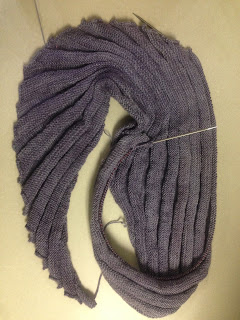 One of my knitting groups, LSSK, has a scarf swap.  This is the second year for me to do the scarf swap and I am super excited.  I will probably not be able to post much about this super secret project as I am not sure if the lady I am making the scarf for reads this blog....so know that I am knitting on a super secret project, Scarf Swap, that I cannot show pics of.

On an exciting point, I have helped organize a second annual knitting retreat with my SNB group.  In the fall of 2011, a lady from our SNB group had to go move to the Houston area.......so, in February of 2012, a bunch of us regulars went to her house for a whole weekend SNB.  We had such a great time that we wanted to duplicate it.  I asked my sister if we could use her lake house for a knitting retreat.  My sister said yes and thus the plans began.....at the end of the retreat in February 2012, we said our motto was to drink more and tink less....because we all did a lot of drinking that weekend and hardly anyone had to tink back.

So for the 2nd annual retreat, we had shirts printed up..... 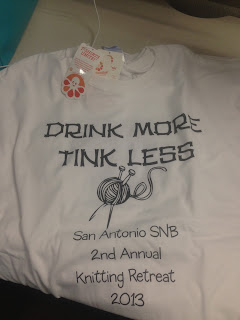 I am really looking forward to this retreat!  I need a break!

Lastly, I leave you with a picture I found on ravelry.  It is about goals so I figured it tied into this posting very well....it is a very good saying that I will try to remember more often: 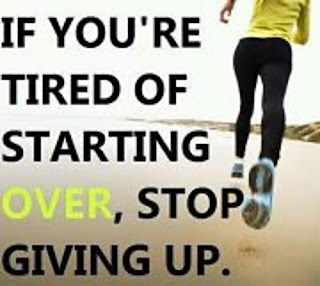 Happy Happy Happy knitting everyone!
Posted by Knitphomaniac at 12:41 PM